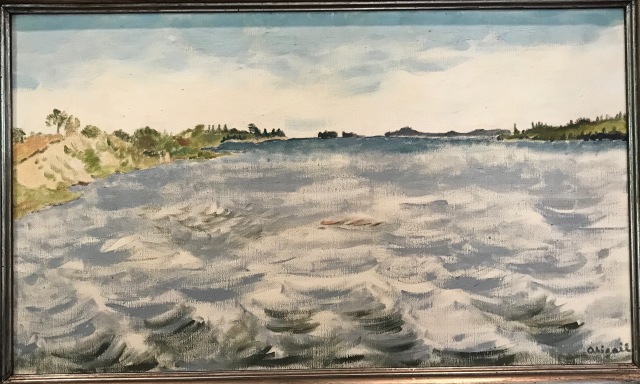 Painting of Narraguagus Bay
by Abigail

I’ve got a funny feeling this is not a trendy topic. Oh well. Here goes.

Epistemology, the logos of episteme, is philosophy’s term for theory (or theories) of knowledge.  In modern times (that is, from the 17th century onward) epistemology has started from skepticism.  Claims to knowledge would be deemed guilty (i.e. unbelievable) until some way could be found to prove them innocent (believable).

It’s as if something were assumed to be wrong with us, affecting our power to know things, and we’d have to first rebut a whole array of defamatory insinuations before we could feel secure about knowing anything at all.

This guilty-until-proven-innocent assumption is quite different from how knowers were regarded in the city where philosophy first began: ancient Athens.  For Aristotle, anyone who claimed not to know — whether he had a body or whether other men had minds – would be just nuts.  Or, more likely, pretending to a skepticism refuted every time he stepped out the door and managed successfully to dodge oncoming traffic.  In sum, a professed skeptic was either a poseur or else sincerely crazy.

Our natural faculties were deemed fully worthy of trust.  My eyes do see what’s out there.  And so on for my four other senses.  The same goes for my intellectual powers, rightly used.  It’s okay for me to generalize from experience.  I can even draw further inferences based on my initial generalizations – meanwhile not neglecting to review the inferences drawn by other thinkers and figuring out which ones make the most sense.

What would Aristotle say about the modern developments, going forward from Copernicus, Kepler and Galileo?  He would probably say that “the moderns” were following the same method – the difference being that they had more data and concomitant hypotheses from which to work.

In recent years, there’s been a movement to revive Aristotelian optimism and self-trust.  The term “virtue” is a translation of the Greek arête, meaning excellence.  Virtue Ethics is ethics based on the excellence of our inherent power to tell right from wrong.  Virtue Epistemology makes the same claim with regard to knowledge: We can tell what is true and what is false.

To put it succinctly: we are naturally disposed to judge correctly.  We stand at the norm.

Well good!  That’s settled.  Can we all pack up and go home now?  Maybe get in a little TV?

Almost, but right about here, I have to introduce a troubling note.  It’s well known that we are social creatures (“political animals” as Aristotle puts it).  As such, we are not impervious to other people’s opinions.  For example, if they think our clothes don’t fit or our accent is strange – and they let us know what they think – we will suffer.

More important from the standpoint of Virtue Epistemology, we will tend to think — about our detractors that —

We tend to internalize other peoples’ bad opinions of us.

What does this do to our normality – which is to say, trust in our own perceptions, opinions and reasoning processes?  Just as you would expect: it distorts them.  You say you’ve got a hide so thick and tough that nobody’s bad opinion gets through?  Well, friend, I’m afraid that too is a distortion.  And such distortions are almost impossible to avoid.

If you can avoid them,

please let me know how you did that.

You began life with your cognitive abilities and self-trust lined up in a normal way, like the vertebral discs on a spine.  But then, from the great storehouse of defamatory fictions, you overhear some quite nasty claim about yourself or your group.  What happens?

in it, internalizing the insult.  Then comes the next bit of deprecation.  Ping.  Another zag or zig.  So by the time you reach adulthood, your hold on Virtue Epistemology is in pretty zigzag shape.

It’s probably safe to suppose that every last mother’s child of us, whatever the ethnic or psychological predicament, has internalized a fair number of pings.

So what now?  How do we recover the human norm of self-trust?  Aristotle’s great Metaphysics opens with this optimistic declaration:

All men [people] by nature desire to know.

I’ve born it in mind every time I taught a class in philosophy.  Is our deep or deepest desire unfulfillable?

We don’t really feel unsure whether the hand I hold up in front of my face is really a hand.  Or whether we’re real people rather than brains in a vat.  Those are classroom problems – not the ones we ourselves have.

We feel unsure in actual situations, ordinarily where there is some warrant for the feeling.  If for example the deprecation targets Jews, what I — being Jewish — really feel and fear is that the deprecation is part of a longer danger: it reaches back to a tragic past and links it to a threatening future.  It doesn’t feel like a bounded insult — more like an avalanche or a tidal wave coming toward me.

We are too finite — too local, too unfinished ourselves — to have any such grand powers.   The power we do have is simpler:

We can counter a particular lie.