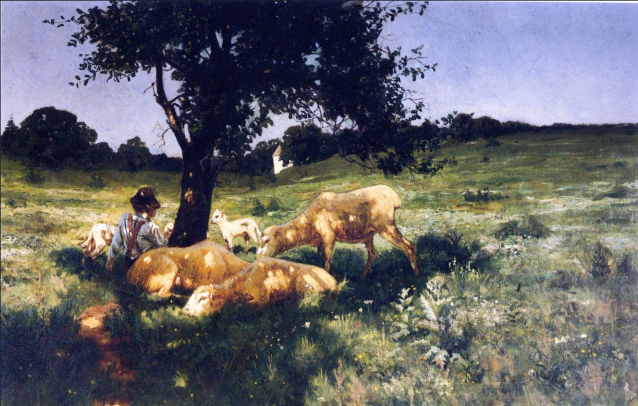 Boy and Sheep Lying under a Tree
Henry Ossawa Tanner, 1881

We’ve been away in California for the past week, to allow me another round of the neuropathy treatments available only at a clinic in Loma Linda.

The friends and family we usually see there are now under the pandemic’s lock and key.  We were making our masked way to and fro under the rule of social distance, applied to personnel at the Marriott and our servers at outdoor restaurants.  Though the human factor will find a way to get through, even under such difficulties, the altered interactions were tiring, as were the morning treatments.

This choreography led us to look toward bedtime reading as the lamplit highlight of each day.  What to read became more of a problem than I’d expected, because a new book on logic, for which I’d entertained the highest hopes, turned out really bad after its misleadingly exquisite opening chapters.

You don’t want to read news magazines at bedtime.  You want a book.  The Marriott had placed two leather-bound books on my night table: The Book of Mormon and the King James Bible.  Since I’m not a likely candidate for The Book of Mormon, that left the King James.  It’s not been revised in the light of nineteenth-century Source Criticism nor updated for the modern idiom.  But what the heck.  I’m not actually that modern and my father, born and raised in Louisville, Kentucky in an era when the King James was the only version read by the local people, thought it was closer to the spirit and beat of the Hebrew original than the more recent translations.

Since Saturday morning Torah Study at my Reform Temple has made me fairly familiar with the Torah (the Pentateuch or First Five Books of the Hebrew Bible), I thought I’d start from the Book after that.  I’ve read through the Bible before, the New Testament as well, but not in a long while.

Now I reread Joshua, Judges, Ruth, 1st Samuel and most of 2nd Samuel.  One thing is clear to me.  These Books were not cooked up in a smoke-filled room in Babylon City hundreds of years after the events they describe.  Here’s why.

Had it been put together by men distant from these events, saying to each other, heh heh, let’s fabricate a national epic, it would have been a flattering story.  Whereas it’s often disgraceful.  There is no national epic that comes anywhere close to it in this respect.  It’s one of those family stories you wouldn’t want to be allowed out of the closet.

A second reason to credit the historicity: it’s full of long lists of boring, unpronounceable proper names.  The kind of lists nobody would retain for any purpose other than the record of a family album.

A third reason it’s likely to be factual: It’s studded with place names identified as x and further identified as the place that used to be called y.  Why write that down if it’s made-up?

A fourth reason: When an event is described as having happened in the locality of z, and then reported to be commemorated at z by some heap of stones or other marker, the narrator standardly finishes his story as follows:

And the heap of stones is there

Why say that unless the reader who travels to z can see for himself that the commemorative heap is indeed at z?

These seem to me marks of a preserved record of a history that is real rather than mythic.  That’s not to rule out exaggerated or encoded elements.  But even those are embedded in a grounded narrative studded with factual flags.

What do I make of these memories?  This time, reading these chronological Books of the Bible was for me an encounter with reality — filled with excitement, drama, threats, rescues, feasible fights, and the sweat of life on the dirt-and-sand-packed ground.  God is in it, though not as the only player.  And everybody knows who everybody is.  People are sharply etched against the timeline of their lives.

Okay, maybe the sun didn’t stand still at the battle with the Amorites in Joshua 10:12-14.  (Or to update the astronomy, the earth didn’t stop rotating on its axis.  If it had, all the players and much more would’ve flown off the planet.)  But exceptionally bright moonlight (the moon is reported to have also stood still in the same battle) might have prolonged visibility.  What I call “Jewish miracles” don’t require suspending the laws of nature.  They do require that one notice and rise to the occasion of providential coincidences.

Orde Wingate was the British officer whom Moshe Dayan credits with training his clandestine fighters before the declaration of modern Israel’s statehood.  Wingate would spend his evenings reading the Bible, wearing nothing but the kerosene lamplight, while he pondered the military strategies encoded in Joshua and Judges.

The stories I read weren’t just about battles won and lost.  Some stories struck notes of poignant friendship — Ruth to Naomi, Jonathan to David — like plucked harp strings that you can still hear.  These players act in the midst of hard choices whose measure they prudently take.  They don’t act like made-up characters.  One could call them hyper-real.

How do we too get to be real to ourselves in our own circumstances?  I think we get there about the way the Biblical characters did: staying on the timeline, taking one step after the previous step, keeping consecutive accounts of our aims, motives, acts and their consequences, course-correcting when we notice missteps, in sum: living our stories as gap-free as we can.

The Bible is a compilation of stories, lived well or badly, in part or in whole.  Truthful memory can be terribly unflattering.  Why then were so many combined efforts put into this record?

Well, supposing the Bible has this part right —

with a very good memory.

1 Response to The Good Book