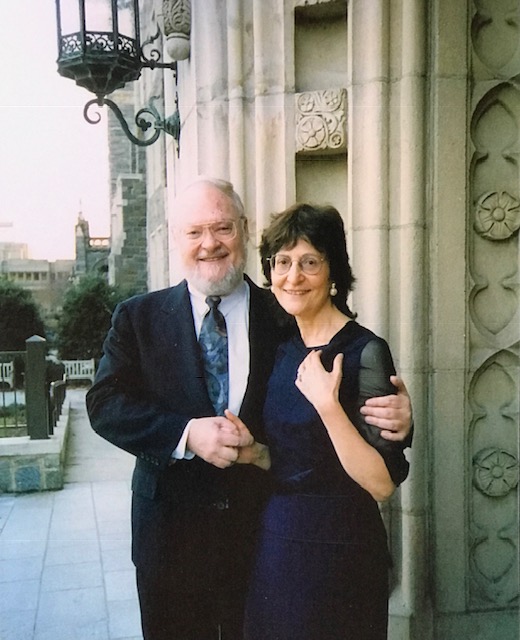 January 20th, 2020, is our twentieth anniversary and, over the past few days, we’ve been talking about what it all means.

In our first year, when I still lived in New York and Jerry in Washington D.C., we each felt this imperious bond pulling us toward a joint life lived in shared space and time.  I sensed that this relation was not a thing to be contained or shaped to fit my convenience.  We shouldn’t settle for a commuting marriage.  Rather, the marriage and its requirements should shape where and how we lived from here on.

To make this feasible, I felt it would be best for me to take early retirement.  When I floated that idea with colleagues, to a man and a woman, they all (with the exception of one very close woman friend who was also a philosopher) — advised against it.  The Provost, the Director of the Humanities Institute, a woman colleague in Psychology – all described my experience of falling deeply in love as a kind of benign and enjoyable … psychotic episode.  Inevitably, they assured me, remission would set in and I would return to sanity and the real world.

It was not that I had been feeling all that bad about being single.  By then, feminism had bestowed on a woman’s solo life a social dignity that was new but also quite real.  I loved teaching, loved my familiar New York neighborhood and – as much as anyone can say that – I “had it all worked out.”

How did I know I wasn’t – as some colleagues were tactfully hinting – crazy?  Well, I was coping competently with the other challenges in my life.  My character, capacities and relationships hadn’t collapsed.  But you can never know with certainty – if by “know” is meant occupy a vantage point outside the realm of your experience.  I didn’t possess what is called “the view from nowhere.”

Was I so fatally smitten that it had become psychologically impossible for me to step beyond the romantic feeling — into a more neutral and objective space?

No, I could have done that.  Nothing I could see, from the advice of bystanders, or from within myself, or from guidance coming to me in prayer or meditation, authorized a recourse to neutral outsiders.  I didn’t feel that I was nuts and needed to check my desires and beliefs with a credentialed specialist.  But I was also aware that it is possible for the firmest beliefs and the strongest desires to be deluded.

Why then did I take that chance, putting at risk the identity conferred by place, institution, status and role?

By “taking a chance,” I’m not speaking of being in love or even of marrying Jerry.  I’m speaking of reshaping my life so that, henceforth, the requirements of a life together would determine my and our future choices.  Why did I decide to do that?

My whole life long, I had viewed romantic love as the best thing in the world.  By romantic love, I didn’t mean the sort of coupledom that medieval troubadours sang about – like the romance of Tristan and Iseult – where the lovers exist in a bubble of their own, defying the norms of their day, and find untroubled union only in their premature death.

Walking through the Père Lachaise Cemetery in Paris, one comes upon the gravestone of Heloise and Abelard.  In French it reads, “They lived a very Christian life and in death they are together.”  If you don’t already know it, I suggest you look up the story of their “very Christian life.”

No, the couples who modeled romantic love for me came from a different text and tradition:  Abraham and Sarah, Isaac and Rebecca — Jacob and his Rachel at the Well.  They were each flawed people but, by their union, they moved the story of God and humankind forward.

I saw marriage founded on true love as a thing of tremendous consequence.  My parents’ marriage had been of that order, so I knew it was attainable.  The possibility hadn’t died with the Biblical prototypes.

Reader, I married him.

Was I right?  How did that work out?

Actually, far better than, in the more extravagant daydreams of my girlhood, I could have pictured.  Because being knowingly loved is reassuring …  profoundly and minutely … recessed parts of me could come out of their concealing shadows and get integrated with the parts already visible in daylight.

Of innumerable results, I can only list a few: unfinished articles could find their ways to completion.  A book previously published could be updated and reissued.  Fights I might have lacked the courage to fight alone, or the know-how to win, could be fought through to the finish.  New projects I never thought to undertake could be set going.  New friendships — and the irreplaceable old ones – could be sustained and supported, from Jerry’s side to mine and mine to his.

We read each other’s work and make suggestions that prove helpful.  We know how to get out of each other’s way and let each one be.  We support each other’s feelings, intuitions and silences.

2 Responses to It’s Our Twentieth!