Persecution and the Art of Writing 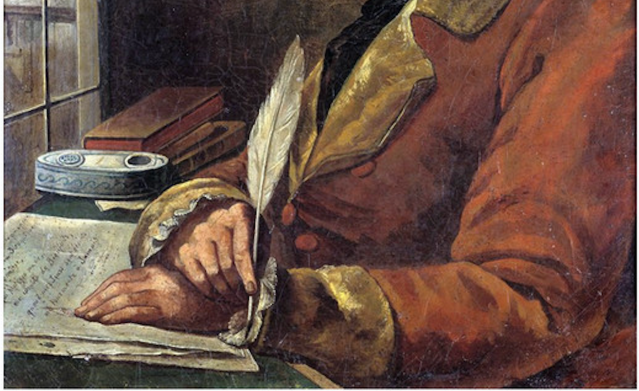 Detail of “Voltaire in His Study”

Persecution and the Art of Writing

That’s the catchy title of a book published in the 1950’s by a man named Leo Strauss – initially derided, later enormously influential.  Outside philosophy and political theory, Strauss’s name is not generally known.

Briefly, he claimed that many of the most esteemed philosophers wrote in code.  They wrote on two levels: a popular level for the naive reader and a higher level, encoded for initiates who could see through the surface to the text’s hidden teachings.

Why was Strauss’s claim derided at first?  Why did it eventually gather followers and a wide swathe of influence?

Since I just finished reading Persecution and the Art of Writing, the book where Strauss’s thesis was first promulgated, the cause of the derision seems clear enough.  Strauss wrote in a liberal era when the idea of philosophers keeping their true views secret seemed completely foreign.

Why should truth-seekers hide their findings?  It sounded like a Conspiracy Theory without conspirators, a drama without Dramatis Personae, a tempest in an émigré philosopher’s teapot.

Today however, when writers I know are proceeding with extreme caution, when a misplaced pronoun can get one denounced for Thought Crimes, Strauss’s idea looks less far-fetched.  It seems a bit more like the human norm.

I’m very much for straight shooting.  In fact, I could almost say that the aim of a human life is to become the kind of person who says what she means and means what she says.

But think of the opening days of a courtship.  What is one really thinking?  How much of that is one saying?

I remember the retort of an undergraduate, a young woman to whom I was giving a tutorial on Plato’s Republic.  Plato was the first philosophic feminist who was realistic about the problems of such a policy.  Realizing that coquetry and desire to please kept most women out of the business of truth-speaking, he postulated an “ideal” solution: let the state manage courtship!  The state has an interest, since courtship produces babies who are the future citizens.  In the “ideal” case, the state will decide which men and women should be paired together for reproductive purposes.  Let’s make erotic life rational!  That’ll be perfect, right?

My student, a young Palestinian whose parents were pressing her to drop out of college and marry a husband of their choosing, said this:

“What is the selected woman supposed to say to the selected man, when they are put by themselves in a room together?”  She stuck out her right hand, as if to shake hands frankly with a colleague.  “Hello, I’m Sally?”

Obviously, that’s not how you stage a courtship.  We can generalize this point.  There are things you do not say until it’s time to say them.

Does this mean that real life is a tricky business, where one can say the right thing to the wrong person or the wrong thing to the person you mistook for the right person?  Does it mean that it takes a lot of time, trial and error, before you learn who is who and which is which?

2 Responses to Persecution and the Art of Writing