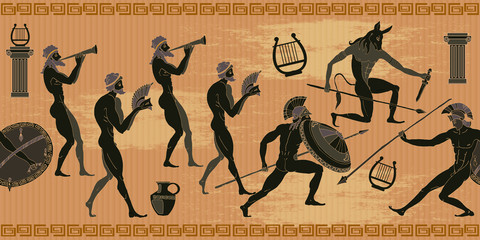 Plato wrote a dialogue, The Symposium, on this very topic.   The setting is a drinking party held to celebrate the victory of one of the guests in a poetry contest.  They go round the circle, each guest standing up to give a speech on the Great Question of the evening:

It’s a question that you never get to the end of.  Years ago, in a down-at-heel café on the Rue de Tournon, I overheard two men speaking to each other in Russian.  I know what Russian sounds like since there were many Russians in my childhood, though I never learned their liquid language.

“What are they saying?” I asked my Czech friend, Anna.

“You really want to know?”

“What is love?” the first one is saying,

“To love is to suffer!” the other one is replying,

We both laughed.  It was so Russian!

Anyway, none of the ancient Greeks at Plato’s drinking party answered the Great Question that way.  For one thing, unlike the Russians, the Greeks were talking about same-sex love.  Interestingly, however, nothing they said would be inapplicable to the love between men and women.

Why do people connect erotically?  Unlike today’s people, nobody gave “pleasure” as the answer.  One said you do it to get schooled in the social arts by the more polished partner.  Another said you do it as a spur to ambition – to shine in each other’s eyes.  Another recommended it as a health measure.  A more romantic speaker believed that we each search for our other half, to feel complete.  The most seductive speaker suggested we succumb to approaches that flatter hopes or vanity.

Finally, as is the way with these dialogues, Socrates steps up.  He credits a wise woman named Diotima with the secret of love.  Eros is at work on every level of life, from the biological to the political to the workings of memory.  But love comes into its own as our intrinsic longing for what is divinely good and beautiful.

Unlike most dialogues, in this one, Socrates doesn’t get the last word.  The contest is disrupted by Alcibiades, a drunken party crasher who treats the guests to a graphic description of his frustrated passion for Socrates himself – not as a reminder of transcendent perfection but as his love object — in the flesh.

Today philosophers and others who work in the Academy — the House that Plato Built — can be fired, stripped of tenure and emeritus status, denied publication by editors of professional journals and books, after merely being accused without a hearing or trial.  The accusation can be enough.  It goes without saying that a verdict of guilty after a hearing is social and professional death.  That’s a hell of a lot of punishment for what might be a single misstep.  (Or maybe more than one?)

Well, shouldn’t serious philosophers just stay out of trouble?  Isn’t that the best way to protect yourself and to keep your professional honor?  Stay home!  Keep to your cozy room!  Keep a safe space between you and anyone you talk to.  Keep your conversation neutered.  Use no sexual metaphors.  Don’t even call “philosophy” – the Greek terms means “love of wisdom” – by its Greek name.

Never speak of yourself as having — for anyone or anything — a passion.

Not even a convent or monastery

expects that much austerity

from a young nun or monk!

When I set out after wisdom as a young student of philosophy, the idea of bringing my feminine self into its sacred male precincts was repudiated outright by my fellow grad students and by the professors I most wanted to emulate.  They actually told me, sometimes in words and more often indirectly, that if I wanted to stay in the field,

“you have to destroy your femininity.”

Why did they do that?  And why did I remain friends with some of them in after years, when the culture had changed in this regard?  Though their words were hurtful, generally speaking their intentions were not malicious.  They were trying to be men.  I honored that in them.  I was trying to be a woman, even though a philosopher.  It wasn’t easy for any of us.  Since we’re not animals, we lack unerring instincts.  We have to proceed by trial and error.

By the time I had my first teaching appointments, the line between woman and philosopher was no longer incised in stone.  The man/woman ratio was advantageous for a young woman looking for a male partner in life.  Being a woman in the field was interesting.  It was fun!  When I think of those first years, forgive me, lads and lasses, but the song from Camelot, the musical, floats into memory:

Where are the simple joys of maidenhood?

Where are all those adoring, daring boys?

Where’s the knight pining so for me,

He leaps to death in woe for me.

Where are a maiden’s simple joys?

By the time I was threatened with reprisal, it was for withholding my vote — not my body!  My body was considered my own business.

All I can say is, had I sought reparation – among the “guilty” or the “innocent” — for the suffering of my graduate school days, I would’ve missed some of the longest and best unbroken friendships of my life in philosophy.  And missed the capers, the mischief, the laughter, the tales told out of school, that still bring a wicked grin when I remember all that.

More, I would have missed philosophy itself – the love of wisdom that naturally embraces the teasing, the heartbreak, the reciprocities of wounded pride, in the shared pursuit of as much truth as we can get, retail or wholesale, when we do go after truth.  There would be little to ponder, little to research, little to write about, little to share.

That’s a heck of a lot to lose

for the sake of a moment’s revenge.