How Can I Tell If It’s God? 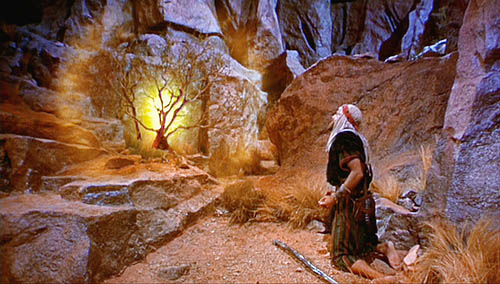 Charlton Heston in “The Ten Commandments”

How Can I Tell If It’s God?

I have Christian friends who tell me that a moment came in their experience when “everything changed.” They “met the living God.”

Another friend, Jewish, who’s pretty well versed in Yoga, recently reported briefly entering a different state or dimension, higher than high, which sounded like a pretty lofty rung on the ladder of Yoga, as analyzed and catalogued in Patajali’s Yoga Sutras. In India, they’ve been doing this for a long long time and they know how.

Has anything on that order happened to me? I don’t think so. At one time, I did yoga meditation regularly and attained the level called Kumbhaka, suspension of breath. So far as I could tell, I wasn’t breathing! It’s supposed to be the state preparatory to entering bliss. Well, I waited and waited, bliss never happened, so I started breathing again. What the heck.

I used to love old-time Bible movies. You could always tell when divinity made its entrance. If Jesus was the main event, he’d be back lit, with auburn long hair and organ music wherever he walked.

If Moses was filmed standing in front of the Burning Bush, the Voice of God spoke in the King James Version, amplified by an Echo Chamber effect.

Jerry, who (as far as he could tell) had never believed in God, nor sought Him, heard a Real Voice. It did not come with Echo Chamber attached and it used no Elizabethan thee’s and thou’s. Yet, from inside the experience, he found himself unable to doubt that this was God talking. Jerry is a professional philosopher, trained in epistemology – the theory of knowledge – which often comes down to a theory of doubt. By temperament, he’s disinclined to get carried away. He’s more like a natural skeptic. So if Jerry reports an experience that he can’t sincerely doubt, I take his report very seriously.

Anyway, thinking about these questions of belief and doubt, I finally asked myself, Why do I believe in God?

I was raised in a home with so many rich, layered Jewish associations that the question of belief or disbelief was not one that presented itself in that form in my childhood and youth. Since my father, for reasons that belong to another story, had taken us all out of organized Jewish life, I never learned the practices of Jewish observance but also missed those disillusioning experiences that lead many to kick the dust of childhood religiosity from their heels. Nothing had occurred to put me off the subject and I entered my twenties with a vague sense that God would take proper care of me if I just counted on Him and did my best.

That did not prove out. In fact, disappointments followed so thick and fast that finally I decided that – if I couldn’t “cure” God – I could cure disappointment by ceasing to place any more hopes in Him. (I’d say Him or Her, but I didn’t think that way.)

What I hadn’t foreseen was that — with a negation sign where “God” had been — I didn’t travel lighter or cope with my life any better. The full story is told in Confessions of a Young Philosopher and I won’t rehearse it here.

Here I’m trying to locate the moment or the experience that turned me Godward again. Normally, when the teaching week was done, I would find a café and review it in my journal. What had happened? Did the week turn up defining concerns or themes? (Often it did.) Had these experiences challenged any belief I held or method I was using? If so, could I explain it away? If not, what should I change?

René Descartes, the so-called founder of Modern Philosophy had a method, which we call the Method of Doubt. If I had a method, it was the Method of Total Immersion in My Beliefs. I didn’t hold them at arm’s length. If I said “I think so and so,” I acted as if I really did think it.

The story told in Confessions was a saga of my twenties. It fell into three parts. Publishers would tell me that they didn’t hang together.

So I tried a succession of strings on which to hang the beads of my experience: Freudian, Hegelian, Spinozistic, and the string still didn’t run smooth. Finally (all out of ideas) I tried Jewish. Hey! That worked! Could it be … could I be … Jewish? What could that possibly mean for a person who didn’t observe the practices of that identity and didn’t know how?

By that time, there were many layers in my life. Things had happened to me that I took to be miracles, Providential interventions. They weren’t backlit with organ music. They were what I call “Jewish miracles,” grounded in space and time, occurring in the midst of ordinary life. “Coincidences” customized to take note of, to make sense of, and finally to overcome some of the hidden impasses of my life.

Were these decisive? No. I knew the miracles could be regarded as chance happenings. Onlookers would take them that way.  Academics don’t talk about miracles. But the string of personal history didn’t pull taut till I took them as God-sent.

It wasn’t one single, blinding explosion replacing the day-to-day effort of trying to make sense of experience. But eventually it made so much sense of my life that I stopped calling it “belief.” It became who I was.

2 Responses to How Can I Tell If It’s God?