“A Philosopher’s and a Woman’s Place” 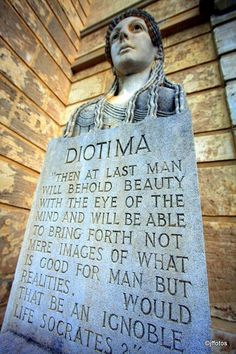 Diotima bust at the University of Western Australia

“A Philosopher’s and a Woman’s Place”

I’ve mentioned that a former colleague — alongside whom many a good fight was fought — has decided (to my great surprise) to nominate me to give one of the American Philosophical Association’s John Dewey lectures. It’s the lecture where the philosopher tries to trace out the connections between the life he or she has lived and the philosophy he or she came to think true.

Often enough the correlations turn out no more than chronological.

First I studied at x and worked on such and such problem under the guidance, or teaming up with, so and so. Next I was appointed to the university of z and worked on thus and such, which was very much in the air at that time.

Since philosophy proposes to address significant questions, the hope is that the link between the life and the thought won’t be as accidental as that.

This long-shot nomination has prompted real curiosity about the life/philosophy connection. In my own case, I’ve made it a principle not to write anything philosophical about any question I don’t personally want or need to solve, not to say anything in writing I haven’t first lived or tried to live, and not to pretend to be interested in anything I wasn’t actually interested in.

The Woman Question (as it was called in the nineteenth century) was always a real question for me. The accomplished women philosophers of my youth had no choice but to “think like a man.” While I greatly admired their attainments, I also thought that this obvious sacrifice of womanhood entailed its own burden of falsity.

Being told not to think like a woman put both thinking and womanliness at risk.   The first risk took you out on a limb as a thinker. You had to keep on keeping on — as in the cartoons where you could continue to speed through the air beyond the cliff’s edge — provided you didn’t look down. The second risk came home to you when you woke at 3:00 o’clock in the morning and realized that you couldn’t take your body armor under the sheets with you.

That said, the yellow-brick-road of sincerity was not exactly ready for me to skip down (or even to discover) when I set forth in “the profession.” The questions that presented themselves to me, as needing to be solved, had to do with the intrusion of “history” into the smooth surface of eternal truths and classical virtues. By “history” I meant happenings that were the shakeout from the twentieth century’s wars — like communism, Freudianism, anti-colonial activism – ideologies that reflected but also masked disruptions in personal life and could be used to replace personal life. These intrusions (detailed in Confessions of a Young Philosopher) had beset my course in life as a young woman. I needed to know if philosophy could help me to make sense of them. The philosophers I knew of, who took up directly the relationship between actual history and eternal verities, were Maurice Merleau-Ponty and G.W.F. Hegel. I wrote my master’s thesis on Merleau-Ponty and my doctoral dissertation and first few articles on Hegel.

These days I’ve been rereading the early articles. I hadn’t looked at them in many years and had remembered them only with embarrassment. About the first, a well-known scholar had commented, “You have explained Hegel to Hegelians. Now try to explain him to non-Hegelians. That is much harder.” Initially, I had taken that for a compliment until a lawyer friend explained to me that it was really a put-down. From this distance, I don’t know if my lawyer friend was right or not, but at the time I took his opinion as oracular and felt simply drenched with scorn.

The second article on Hegel was initially rejected by the referee at a well-regarded journal. Hoping to overturn his verdict, I sent him the report from the same journal accepting the earlier Hegel article. Well! Silly me! It turned out that the positive referee and the negative one were the same guy! Eventually the second article got accepted too, but all I remembered of that incident was my embarrassment when the referee replied that he had written both reports.

The dust of those memories having finally settled, I’ve now reread both articles. I was stunned. They were original, ambitious, well crafted, thoroughly researched and deeply thought through. Goodness! I couldda been a contender! I’d always supposed that the people who stepped forward to help me during my later job struggle did so because they thought I was a nice girl. Not true. Firing a young philosopher who could write at that level was shameful. I did not deserve it and there were academics and others who knew that.

When I was at the University of Sydney, and some of the philosophers there were wonderfully helpful in suggesting works to consult in connection with the book I was then writing, my former husband told me that they would not have been as nice “if you had been ugly.” That wasn’t so at all. I had talent. Pretty or ugly had nothing to do with it.

Today I’ve read another two early articles, where I see that the thesis, with which I started work in philosophy, would not quite stretch to cover the illustrative cases that originally I’d hoped it could. Had I been interested in building a career, I would’ve stretched my hypothesis to cover the anomalous cases anyway. Philosophers more famous than I did exactly that over a lifetime. They used language ambiguously with the aim of seeming to solve problems that they were smart enough to know they hadn’t solved.

I wanted to test my hypotheses in experience – to live a life — and revise them when they wouldn’t stand the test, rather than build a hot-house career on the ground of the earliest ones. That said, from my present vantage point I can see how easily crushed I had been and how “feminine” that was!

These reflections on my career in philosophy were interrupted this afternoon by a chapter of a book about women in Muslim countries that I’d been reading for the last week or so, titled Excellent Daughters: The Secret Lives of Young Women Who Are Transforming the Arab World, by Katherine Zoepf. The author writes with a sympathy for her subjects, partly grounded in the parochial and patriarchal religion (Jehovah’s Witness) in which she was raised. She understands how women strategize when their most vital concerns are lived “underground” as it were. She can read the codes in coded worlds. She writes with intelligence and clear-eyed good will.

For example, the Syrian women she describes get together in groups devoted to the most pious study of the Qur’an and are able to leverage their perceived piety to widen opportunities for educating women in universities.

In the arresting chapter I just finished, Katherine Zoepf describes a case of honor killing. Here the immolation of women on the altar of the male ego is clear and unadorned. An innocent sixteen-year-old girl is raped. The victim has a kindly cousin who is willing to marry her anyway. Shortly after the marriage, her brother murders her. The murdered girl’s family celebrates the murder! Zoepf explains: women have no honor in this system. Men’s honor lies in their effective custodianship of the virginity of the family’s women. If any shadow is cast on that virginity (immodest dress, unauthorized marriage, rape), only murder of the woman with the shadow can wash away the stain on family honor.

This shocking story put such a blinding light on my relatively free life, with its subtle shadings of intellectual freedom — and internalized subordinations inherited from earlier eras — that it blanched the nuances I’d been trying to track in my own case. That does not mean that my concerns are or were trivial. It only means that freedom allows one to live a nuanced life and to test the successive beliefs of such a life. Under such a threat as this sixteen-year-old lived and died,

the examined life is simply blotted out.

Western feminists have been reproached for failing to marshal their freedom in support of women who are still enduring repressions that crush life and thought, femininity and masculinity equally. I wonder if the real inhibitor is not the currently fashionable deference to “the other” – but something much older —

2 Responses to “A Philosopher’s and a Woman’s Place”