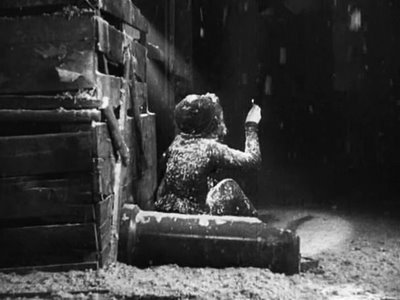 If we hadn’t begun it the evening before, it would have been even more disastrous.  But I was scheduled to have an author photo taken by a professional photographer who does those things, and my dread of being photographed (in case the camera doesn’t lie) might be offset (we decided) if we reserved our birthday dinner at the fine French restaurant for Thursday the 1st of March, since it would be quieter on a Thursday.

Much to my amazement, the photos were not dogs.  I look like a reasonable, well-disposed female person who might well have sustained the purposiveness required to bring out A Good Look at Evil in its updated, expanded form.  Whew! I thanked the photographer profusely, in fact praised him to the skies!  He made me look recognizable. Fine job.

Over the French dinner, we discussed our marriage.  Why is it so right? Is that like a lottery somebody has to win?  Why do good things sometimes happen to good people?  Seems unfair, somehow.

I had always believed that true romantic love was a reality – a metric for the rest of life – but over the years my judgment had proved pretty terrible in picking out candidates for the job of Significant Other.  Jerry, on the other hand, had not credited romantic hopes. He’d thought modest compatibility was about the best you get. So our personal aims and thought-worlds had been quite different. Though we shared a profession, we’d never met.  And, had certain highly improbable circumstances not combined to put us into prolonged telephone contact, it’s unlikely we would have noticed the invisible strings tying us together.

Only one explanation (other than chance) occurred to us.  Neither had lowered the ceiling of his or her expectations in life.  We’d not been time-servers. We’d not lived for distraction rather than seriously sustained purposes.  So we’d lived fairly disciplined lives. And true love turns out a disciplined calling, in its own right.  Had we earned our miracle? Well, you never earn a miracle.  Let’s say we hadn’t refused it in advance.

If such was the evening before it, how bad could the actual birthday have been?   Good grief. As the Nor’easter blew ever-more-alarmingly outside the house, at 3:00 or 4:00 in the afternoon, the power went off.  The motels were either booked or dark and cold as our home had become. As we gave up the search for shelter elsewhere and were making our way back to our own now-forbidding residence, I stepped on what I thought was the footpath but was really snow piled up covering the parking lot pavement half a foot down.  Landing hard on the foot with the neuropathy.

We spent the next three days attending to consequences that looked both frustrating and frightening.  Would the immobility prescribed for the knee require me to stop the exercises linked to my neuropathy treatments – the first treatments I’d found effective in many years of shopping for a cure?  Would we need to cancel the trip to California for treatments and also a medley of speaking engagements connected to the reappearance of A Good Look at Evil?  How large a setback was in prospect here?

Let me note that I do not have anything like the generally-recommended good attitudes.  I don’t look on the sunny side, don’t find the silver lining, do see the tunnel, but not the light at its far end.  All you can say — in defense of my tendency to look down at the deep pit far below the daylight at ground level — is that it’s quite sincere.

Well, I realized, I can’t do that now.  My ability to project the worst case is a luxury I can’t afford.  I tried to pray. The Guidance was somewhat muffled (how does God get through to Abigail?) but consistent.  It said:

Stay in the present.

beyond the next hour and a half.

the helps around you.

It was a taxing discipline.  But I really had no choice. Sometimes, sincerity can be overrated.  Nobody needed to hear me screaming.

As I talked with Jerry, what emerged was that all the frustration I felt focused on a projected set of plans: the neuropathy treatments to continue without interruption or backsliding and all the book-related assignments to be performed on the expected timetable.  As I looked at these expectations, arrayed before me, some lines came to mind from a country gospel hymn:

In this world of toil and snares,

if I falter, Lord, who cares?

My frustrations were all about my long efforts at recuperated health, the anticipated efforts with regard to my book, my expectations and everybody else’s imagined expectations.

About health, well one can’t do more than one’s best.  About my book, well, as Jerry reminded me, I’ve never understood why people I knew thought that their lives would be worthwhile if only their book came out!  I’d always felt that one’s life, not one’s book, was what was important. A book is, at best, one consequence of a life. It’s not the life itself.

As our conversation paused, I thought of the friendships I still have that I consider genuine.  I went through them, counting them off, one by one. They are very different friends, whose life circumstances and personalities do not resemble each other.  These bonds were more like the unaffected “best friends” one had in childhood and first youth, before prestige and status came in to spoil everything.

6 Responses to My Worst Birthday