“Evil is Really Not Banal” 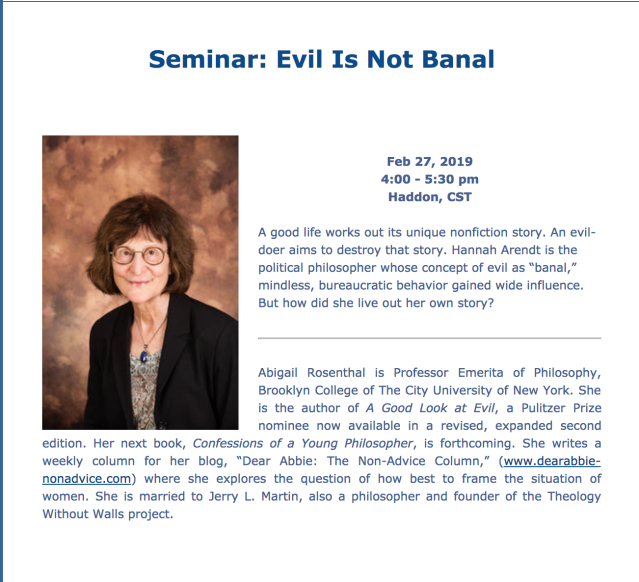 “Evil is Really Not Banal”

This past week we’ve been in California, where I’ve resumed my treatments for neuropathy at the Loma Linda hospital.  The other event of the week, salient for me, was a talk at the Claremont School of Theology with the title,

“Evil Is Not Banal.”

There are two younger theologians who normally organize these events.  As it happened, one was on leave.  The other was home recovering from minor eye surgery and simultaneously tending to a gas leak.

We had a total of five in the audience.

Was I rattled?  Well no.  I was focused on the business of the afternoon, which was explaining what evil is and is not.  But of course I did notice.

There’s a back story to my noticing.  From the moment of its appearance in February 2018, A Good Look at Evil has encountered an astonishing array of obstacles.  For example: it was published with the wrong pub date; the earlier edition was posted on Amazon in place of the expanded new edition; at one time the earlier preface was placed in the new edition instead of the new preface; customer reviews of the new edition were placed next to the earlier edition, and – there’s more, but I hope you get the idea.  Of course, all this while I was coping with a fractured knee.

Despite all of that, from the start the book has drawn attentive, serious and extremely favorable endorsements and reviews from highly regarded people you can’t buy for love or money.

But the feature of its publication that’s been noticed by me was the appearance of a character in my real life who paralleled the character of The Seducer portrayed in my book in the section called “The Rake’s Progress”!

Was this a coincidence?  After all, real life is filled with coincidences — events that seem to have a meaning but are merely the effect of chance.

But on the other hand: if we were to take the imaginative leap of picturing “evil” as a person, having personal intentions, wouldn’t such a person do his or her damnedest to test the ability of a writer to fight the real thing in a real-life setting, rather than just combat it with words on paper?  Was “evil” trying to find out if I really meant what I wrote?

Of course I don’t know … but I couldn’t help noticing.

Anyway, back to my talk at Claremont.  To my relief, I experienced no inward qualms about reading my paper to a small but – as it turned out – highly focused and intelligent group.

The aim of my paper was to show that it took conscious evil to bring about the Holocaust.  The perpetrators of the Holocaust were not mere bureaucrats acting by rote.  Hannah Arendt, who popularized this fiction, had been complicit in a kind of moral cover-up for reasons of her own.  Her reasons have come to light in the years since her vastly influential book, Eichmann in Jerusalem: A Report on the Banality of Evil, was first published. When, from time to time, I stopped reading and gave illustrations from real life, the audience seemed to “get it.”  So, no problem.

Time for Q & A.  There were several intelligent and responsive questions – prompts for further thought about these hard topics.

Then a quiet, decorous gentleman, who had a certain modest but elegant bearing, raised his hand.  It was not to ask a question.  It was to explain, “objectively,” as he said, that Jews had brought the Holocaust on themselves.

How did they do that?  He had a list of about five points.  As it happens, I recognized his points.  In researching A Good Look at Evil, I had read Nazi materials and was familiar with the language and its claims to “objectivity.”

Nevertheless, to hear it in an academic Q & A was a new experience for me.  I’d read about this stuff.  I’d never actually met it shorn of its usual disguises.  I looked at Jerry, seated in the front row.  He was, as he told me later, wondering what I would say. I was wondering too.

Looking upward, the guidance I got was unequivocal. What I said, following it, was this:

“I DENOUNCE YOU FROM FLOOR TO CEILING.

I WILL NOT ENTER A DISCUSSION

OF ANY OF THESE POINTS.

THESE ARE NOT ‘FACTS.’

THESE ARE NAZI CANARDS.”

Despite a few further attempts from the decorous gentleman to reassert his views and his topics, the Q & A got firmly removed from that terrain.  The remainder of the discussion was fruitful and interesting.

So what was happening here?  If “evil” – pictured by imaginative leap as a person — wanted to entrap me in its coils, how better to entice an academic than to draw her into hopeless counter-argument with someone who came to her talk for the sole purpose of excusing the Holocaust with a mindset lethally immune to argument?

This whole sequence of “coincidental” happenings has had the odd effect of firming my resolve with regard to A Good Look at Evil.  The life I prefer is quiet, recessive and harmonious.  I don’t relish a fight.  But if it has my name on it …

11 Responses to “Evil is Really Not Banal”