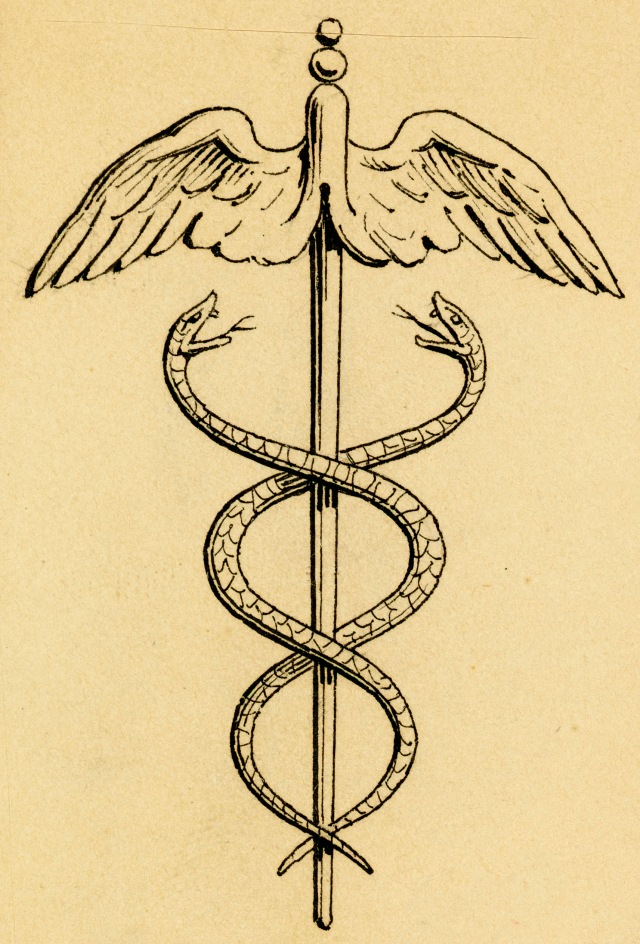 Caduceus, emblem of the medical profession,
originally the rod of Asklepios, god of healing

In a recent column, I told of a problem that arose during a new treatment for my walking handicap. One of the administering nurses routinely used an expression — always accompanied by a little laugh — that embarrassed me. I didn’t like putting up with another woman’s disrespect for my bodily presence as a woman. And, body and mind being close friends, it might be affecting my treatment. But her demeaning words and laughter seemed so trivial that they slid under the radar of ordinary discourse. Was it too small a thing to protest? Was she even aware of her tactlessness? How could I get her to quit it without either antagonizing her or getting her in trouble?

Then I observed that she did not treat another patient, a nun, with the same disrespect. What is more, when I tried modeling more tactful language, the nurse – let us call her Phoebe – reacted by deviating from the normal protocol, ever-so-slightly, but harmfully. That looked to me like reprisal. It was enough to warrant my taking steps to protect myself.

My steps were minimal. The facility employs two nurses. I would just ask to be helped exclusively by the other nurse. If any explanation were requested, my plan was to say, “personal preference.”

When, however, the person in charge asked whether there had been a problem, telling me that her role in the facility was that of a trouble shooter who wanted only to improve the services and would handle any information I gave her in a responsible and harmless fashion, I felt a moral obligation to provide her with the back story.

The supervisor listened with sympathy, agreed that healing was less likely if the patient’s trust was eroded, also that diminishing a patient’s sense of dignity was harmful and finally that the Hippocratic oath included the most basic principle of medicine:

Above all, do no harm.

We parted with her promise to cure the wrong at its source without letting the correction be traceable to me and to allow only the second nurse to administer the facility’s treatment. No more Phoebe.

One half of the treatments had already been given without noticeable effect. I hoped that, with trust and transparency now restored, at least the remaining treatment might prove more helpful. The supervisor told me that testing showed some restoration of function and strength, and I did not think she was making that up. But these modest improvements had yet to show themselves in my walk or quality of life.

After that, in the shared treatment rooms, where Phoebe dealt with other patients while my nurse assisted me, Phoebe seemed to be acting up a bit. She was noisier and a bit more obtrusive than she had been before. Thinking this could be her reaction to being taken off my case, I decided to ask for a private room. Patients had that option. I thought it best to reduce to the minimum any further interaction between us.

About a week and a half passed quietly, with three more treatment sessions.   At the end of the fourth session, to my great astonishment, Phoebe slipped into my private room, shutting the door behind her and took over the end-of-treatment steps! Here I was, entangled in wires, having agreed with the supervisor that one-on-one confrontations with Phoebe were to be avoided, and unable – because of the nearly-shut door – to see outside my room or to be seen by anyone else!

I did manage to say to Phoebe that I’d expected her colleague. She replied that my nurse was detained by a different task and that, in such cases, they covered for each other. This explanation was clearly false in the present instance since my nurse returned within a few minutes and started to open the door, immediately withdrawing when she perceived Phoebe. As soon as I was unplugged from the wires, I cut short the other usual ministrations and went to the nurses’ station to complete my report to my nurse. The two nurses were seated together. Seeing my approach, Phoebe quickly scampered out of sight.

In my whole life, I have never been so angry.

Passing through the reception room as I was leaving, I saw the supervisor with whom I’d had the earlier talk, the one I had supposed would repair the situation. Assuming that the sneaking into my room had been Phoebe’s own idea, I tried to draw the supervisor aside to alert her privately to what had occurred. Shockingly, the supervisor interrupted me to say that Phoebe’s trespass had been authorized by her! Her promise to me had lapsed, she said, since I hadn’t explicitly asked that it be renewed after three sessions!

I did not sleep well that night. At Jerry’s suggestion, I telephoned the supervisor in the morning to make clear that the trust she had repaired was now quite lost. To my further amazement, the supervisor now backed Phoebe to the point of suggesting that the entire episode had occurred only in my mind.   Here I must abridge, but the supervisor went through the backstory I had provided at her request, rewriting it so that I ended up the one accused! First my body had been demeaned. Now my mind was.

In the cool of the day, I had time to review her exculpating version of these recent events. Her version had several parts to it. I went through it, part by part. Just as a promise does not lapse just because it hasn’t been reiterated after a week and a half, so also the rest of her story was not even remotely plausible. She was lying — probably to cover for an errant employee and for the facility that had hired her.

The most curious part of the whole episode was what happened to me when I prayed about it. Usually, I get some consolation or insight when I pray. This time, not. It was as if every prayer sent heavenward on its paper arrow fell back in my lap stamped

I was looking for calm, for the still center, the way when you dive into the middle of a wave, there is a place where no crest breaks over you and you discover calm. I wanted to witness the whole scene with detachment, to get to some meta-level where you see the pattern from above.

The following night I had a dream, this one prompted by the episode. A certain scene played itself out where I was in a building seated across from a character I was dealing with who disavowed a sacred commitment that we shared. After this dream scene was over, still dreaming, I found myself on a lawn outside the building where I spoke aloud this one word:

The dream did not take “a long view” of what had happened. The dream said that the supervisor was in betrayal thrice over. She had betrayed

her promise to me

and the Hippocratic oath.

In the face of such triple betrayals, no transcendence is proper or indicated. Treachery stands alone and unmitigated. There is no meta-level.

Treachery is treachery in all the worlds.

2 Responses to Treachery and Transcendence