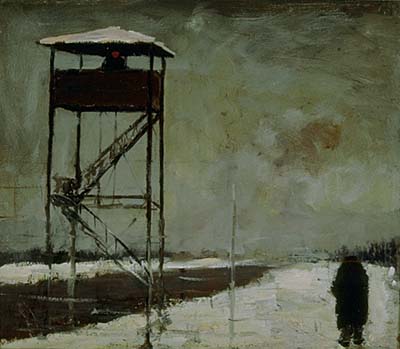 I really hadn’t wanted to go this time. It’s the night for commemorating/remembering the Shoah, the Holocaust, which my temple observes annually. Christian clergy sit on the raised platform at the front of the sanctuary and read, taking turns with the rabbi, from materials prepared for the occasion. Our acting rabbi officiates, the choir sings songs that were sung by Jewish resisters, or mothers to their doomed children, or by those who had refused to surrender religious hopes even as they walked into the mouth of hell.

Usually, my reason for going is that there ought to be more Jews in the pews than Gentiles on the dais. But, aside from showing the flag, I really didn’t want to be there. What tipped it for me was a card that arrived yesterday, signed by every member of the temple’s Board of Trustees, thanking me for what I’d done to bring Kasim Hafeez, the ex-terrorist, to our temple to speak to us. After that shower of graciousness from the Board, I was fully boxed in. School spirit wins again.

Having here disclosed these preliminaries, I’m in fact awfully glad I was there. Lately I’ve been reading a widely praised book by the historian David Nirenberg, titled Anti-Judaism. You would think I don’t need such a downer but, people in my walk of life need to know such things. Nirenberg is a careful and learned historian who is tracking the way anti-Jewish imagery, theological concepts, intra-mural disputes between early Christian factions, all combined to imprint the consciousness of the Christian West with deep-cut anti-Jewish grooves that must still make their force felt. (The book discusses other influences. This is as far as I’ve got.)

Revered nice guys like Bishop Ambrose defined Jews as enemies of God whose synagogues it’s all right for mobs to burn down.   St. Augustine, whose views came to be mainstream, disagreed with Ambrose. No, don’t destroy the Jews, he said. Keep them alive. For two reasons: as evidence of the historicity of the Hebrew Scriptures (the “Old Testament”) and evidence – because of their dispersion and miserable, homeless condition – of the triumph of Christianity’s new covenant over the old covenant between God and Israel, whose continued validity the Jews still maintained.

My goodness! The opposition to a reconstituted Jewish nation is profoundly (if no doubt unconsciously) theological! If Jews can return to their promised land, where they can speak once again the language in which their covenant was originally written, half the usefulness of Jewish existence is gone. They no longer show by their ruined condition that Christianity is the “new Israel.” And if Jews can be nearly wiped off the face of the earth, the other half of their purpose for Christian theology is gone too. Christian failure to preserve their Jews alive shows that Christians have allowed the evidence of their Bible’s historicity to be jeopardized.

Anyway, it’s all very crazy and very distressing. I can’t “normalize” the past. Yet I’m aware of its insidious presence in our world. It’s true, many people have been persecuted and massacred, for all kinds of reasons — having nothing to do with this theology. But it is the longest hatred, of a single target, in recorded history. I often say that, in my next life, I’m coming back Swedish. But now I’m in this life.

To my surprise and gratification, the pews were well filled. The choir was well drilled, tuneful and conveyed the feeling heart. The sermon was truthful and deep. The participating clergy were serious and sincere. They were not putting on an act. They were themselves. At intervals throughout the service, our acting rabbi asked us to empathize with the experience of the victims, entering it in meditative silence.

This is not hard for me. I’ve mentioned here that, in recent years, I’ve had a sharp sense of having lived through it, and perished in it, in a previous lifetime.

Make of that what you will. The “memories” (if such they are) are too precise and emphatic for me to be able to expunge. The experience is one where – from one edge of the human world to the other – there is no pity. The mercilessness fills all you can see, all the way to the horizon. It’s grey. It’s cold. It’s sad beyond sadness.

However, tonight, as – obedient to the rabbi’s request – I entered into a state of empathy with these victims, the feeling changed. This time, I also tried to picture God’s Witnessing Presence – the Shekinah – as close as I was to this evil as it unfolded.

What I saw – this is hard to describe – was a victory. The very act of keeping alive the golden thread of memory – of raising aloft the norms of decency that shed so bright a daylight over cruelty’s shrouded greyness – this act and others like it keep God’s world in being.

It is a great victory.