“You CAN Go Home Again” 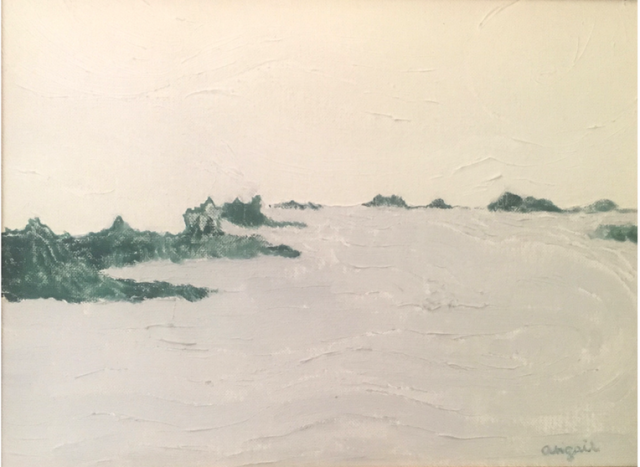 “You Can Go Home Again”

This week we drove the two hours from Bangor, Maine to the little town on the Narraguagus Bay that I shall call – to shelter its hiddenness – the Town of Downeast.

The reason I said to Jerry that we must go where Downeast lies is that my friend Sally, who had a “camp” there, died suddenly last fall. I always feel that I have to go there when a personal space has been vacated like that. I try to step into the empty place and fill it, so people in the town who cared about Sally can feel – however delusively – that we are all still whole and together again.

It had been some years since I’d been back. There’d been changes en route and in town. The rental cars no longer start when you turn the key in the ignition. Now you put a remote any place in the car, including your pocket, put it in park, depress the brake and push a button. Why that’s an improvement is anybody’s guess but it rattled my nerves the whole way there.

Apart from the rental car, the route and the town has not been overly “improved.” I had not recalled what a big empty forest Maine is. You drive through miles and miles of green and nobody’s behind you. They’ve paved some bridges so you’re no longer driving over the water on a see-through metal grid. A while back, some fishing armadas of Russians and Nords came over the North Atlantic and killed all the large predator fish that used to prey on the lobsters. As a result, there’s been a glut of lobsters and the fishing boats are all over the inlet of Narraguagus Bay that was empty when I used to paint it. The restaurant where everyone once gathered has closed. Its owner died but her granddaughter runs the diner on Main Street where townspeople go now. The food is still fresh and the recipes unchanged.

Memory does rearrange things, however. Events wide apart in time bunch up cheek by jowl in memory. The same thing happens with locations. The places that stand out are recalled as if adjacent to each other, when they were far apart in real space. As a result, distances have to be relearned. They are not where, in memory, you left them.

One recollection turned out accurate that I’d thought was a frail hope. It’s the memory of how beautiful it is there. Usually I wear sunglasses, because I don’t like the real colors of the world. In Downeast, I took them off. The blues, greys and greens of the land, sea and sky float up to each other and down again, carried by the fog and the reflections on the water.

you can smell it,

When I still owned the house, the post office lady said to a new neighbor about my parents, “Too bad you missed the Rosenthals! They were beautiful people.”

One reason I kept the ante-bellum house on Bayview Street after they were gone was that it represented their presence in a town that sincerely valued them. It’s not a motive one loudly proclaims. Psychoanalysts might say I needed a diagnosis and a cure.

What I learned on this trip, to my surprise, was that everyone we visited knew why I’d kept the house, why I came back in the after-summers, what I valued – the continuity of the generations, the past-to-future ties, the unbroken values.

The 19th century was the last good century and my friend Shirley is the last 19th-century person. Her children, grandchildren and great grandchildren all have local jobs, nearby homes and – the girls anyway – competitive achievements on horseback. As we chatted and watched the girls trotting round the ring, Shirley said to me that it was right for me to be back home. Hey! How about that? An honorary local! You can keep your Nobel Prizes.

My friends Frank and Ada provided dinners on our two nights there, each one worthy of the Hospitality Award for 2016. Ada had been my father’s philosophy student in the long long ago.

“What kind of a teacher was Henry?” Jerry asked Ada. Here is what Ada said:

4 Responses to “You CAN Go Home Again”