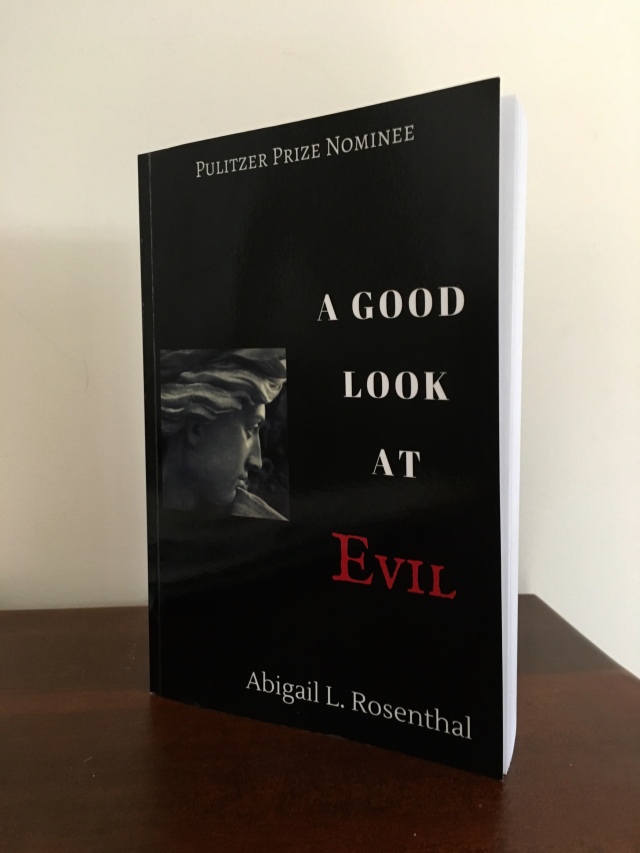 By Barry Cooper, Professor of Political Science, University of Calvary

Abigail Rosenthal is a professor (emerita) of philosophy, which is not the same thing as being a real philosopher. Indeed, there are few enough books written today by genuine philosophers. This is one. Like Socrates, she also conducts conversations with the many non-philosophers, but unlike him, she does so over the Internet in an online column, “Dear Abbie: The Non-Advice Column.” Any book with the title, A Good Look at Evil looks to be heavy going, but Rosenthal’s treatment of an undoubtedly important philosophical problem is remarkably accessible to anyone who still retains a hold on commonsense.

To begin with, she takes the view that “good” is the ability to work out one’s own story, the story of one’s own life, what she calls a corrigible nonfiction narrative. And evildoing is the deliberate prevention or interruption of working out your own life-story, whether you do it to yourself or to somebody else. Stories, literally, reveal who I am –as when, having been offered a bribe of some kind –money, a promotion for considerations, a #MeToo opportunity– one says: “that’s not who I am.” This is, then, a genuine and practical philosophy of existence, a recovery of the understanding of philosophy as a way of living. Moreover it is devoid of the high sounding and usually empty words we often associate with philosophy, words that properly speaking are the verbal coin of the realm for intellectuals, sophists, PR flacks and similar frauds.

Rosenthal relies on Aristotle, Kant, and other great predecessors for what we now call a philosophical anthropology, that is, a philosophical understanding of human being, as well as upon more lightweight contemporary moral philosophy. She draws some delightful portraits of contemporary miscreants –the gambler, the rake, the seducer. She tells us a good deal about why politicians, as distinct from statesmen, are rightly held in contempt, and not just in America, but in Canada, Europe, Latin America, Russia, Africa, Asia. Everywhere! Why? Because, she explains in detail, they are invariably sell-outs. One way or another they betray the trust that reposes in their office and do so for unworthy motives. And everyone, including them, knows it. It happens on the grand stage of world politics and the petty stage of academic politics. Political correctness is just a recent instantiation.

The paradigm case where genocide is linked to mass murder is the Holocaust. Inter-tribal destruction, even the example where Western cultures extinguished aboriginal cultures by killing the aboriginal population, as in Tasmania and Newfoundland, do not compare to the Holocaust because the numbers of human beings murdered is not comparable. Moreover, butchery motivated by desire for loot and power or by cultural contempt is (or seems to be) less malevolent than the meticulously planned and executed Nazi murder of so many millions of Jews. Here we have a genocidal holocaust, not mere mass murder or cultural genocide. That is about as evil as it gets. Worst of all, it took the teamwork of the Germans, either active or passive, to get the job done. Under such circumstances, Rosenthal argued, the only appropriate response is to do whatever one can to survive.

The last chapter of the original (1987) edition described what it would be like to think (if that is the right word) like a Nazi. Obviously, it is not acceptable to take Nazi words at face value and entertain some allegedly “higher” notion of good and evil. We, like Rosenthal, suppose that all along the Nazi knew he (or she) was in the wrong. To the claim that they were entirely ordinary, Rosenthal agreed. She adds that they were also quite determined not to know what was going on, which is another way of saying that they knew perfectly well what was going on. Their unctuous evasion was contradicted by their cooperation with the German government and churches to ensure the Holocaust went smoothly. The notion that the Holocaust was entirely the responsibility of the Leader is likewise evil nonsense because everybody (including Nazis) knows that human beings simply cannot sign over their liberty to another. The Nazis were never victims. So far as the very boring Eichmann was concerned, “being that boring is the symptom a persistent and thickly insulated untruth.”

For many readers, the most interesting part of Rosenthal’s book will likely be her discussion of Hannah Arendt and Martin Heidegger. I will not go into details because Rosenthal’s discussion deserves to be studied on its own. All I will say is that Arendt was not “taken in” by Heidegger. Nor was she just a young woman in love with her prof, and Heidegger was not simply an opportunist with a roving eye. Arendt’s amply documented life, with which Rosenthal is entirely familiar, details a life story that began exceptionally and wonderfully, and “regrettably she spoiled it.”

Abigail Rosenthal is Professor Emerita of Philosophy, Brooklyn College of CUNY. She is the author of A Good Look at Evil, a Pulitzer Prize nominee, now available in an expanded, revised second edition and as an audiobook. Its thesis is that good people try to live out their stories while evil people aim to mess up good people’s stories. Her next book, Confessions of a Young Philosopher, forthcoming and illustrated, provides multiple illustrations from her own life. She writes a weekly column for her blog, “Dear Abbie: The Non-Advice Column” (www.dearabbie-nonadvice.com) where she explains why women's lives are highly interesting. She’s the editor of the posthumously published Consolations of Philosophy: Hobbes’s Secret; Spinoza’s Way by her father, Henry M. Rosenthal. Some of her articles can be accessed at https://brooklyn-cuny.academia.edu/AbigailMartin . She is married to Jerry L. Martin, also a philosopher. They live in Bucks County, Pennsylvania.
View all posts by Abigail →
This entry was posted in books. Bookmark the permalink.

2 Responses to Evil Is Understandable