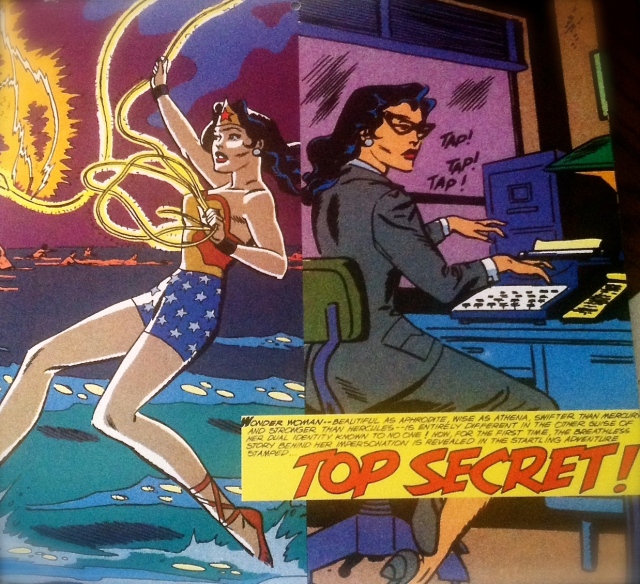 “Wonder Woman–beautiful as Aphrodite, wise as Athena, swifter than Mercury, stronger than Hercules–is entirely different in the other guise of her dual identity known to no one!”

The way you can tell that “I” don’t choose these topics (but respond – as if to an inner prompt) is instanced here: why would anyone (over twenty one) choose that one?

A biographer would assign me a different number, so I woke on March 2 expecting to feel pretty depressed. Instead, when I sat for prayer and meditation, as I do in the mornings, what I received was the unlooked-for mot du jour (word of the day):

Victory? What could that mean, applied to Abigail?

Well, the first impression I got, accompanying the word, was that – despite the gale-force winds that have blown through my life from pretty early on – I’m still right here and “going strong.” There’s no sense of tapering off, battening down the hatches, cutting my losses, or facing the usual amalgam of sodden, depression-soaked “facts.”

There’s no sense, at least none I can identify, of bitterness or disappointment. No sense that things didn’t work out as I planned or that life or God has written me any bad checks. If I look at my life as a whole (not counting particular incidents), I haven’t been duped, misinformed or taken to the cleaners. I’m not doing Plan B, C, or D. I’m still on Plan A.

The fact that I can say that, and not be wallowing in phoniness, is a bit of a mystery. I carry “war wounds,” of course, but would not classify myself as one of the world’s Walking Wounded.

When one thinks of the ghastly sufferings of so many dwellers on our rotating blue planet, the mystery of my own life’s still being authentically on Plan A stands out more starkly. It’s set in contrast to the innumerable griefs of our world that seem outsized – more than can be borne.

Yet I cannot take in the vistas that a visitor from another galaxy might see in a global or even cosmic perspective. From where I sit, in this Franco-Tunisian café, I can only say that God alone knows — and can guage — the differences between one person’s allotment of suffering and the next one’s. Nobody placed me in charge of human history. I can’t assume the view from elsewhere, or nowhere, only from where I sit tonight.

So my question is, why do I feel that my life track is on Plan A? What kind of a life has it been?

God gave me interesting parents, but that was no guarantee of a worthy future in my own case. On the contrary. Their interest (though they loved me) was in living out their own absorbing destinies. By contemporary American standards, they probably flunked Parenting 101. They did not leave room for, or mark out, a separate track for me. What they left for me to do (if I didn’t want to make trouble or be a problem) was watch them, be their discerning appreciator.

The risk for me was that I would end up as the front row, first-class-ticketed theater goer for the drama of them — and never make a life of my own! If I wanted to carve out territory of my own, it would likely require acts of refusal or rebellion – negative acts probably unfair to them and to me too. Otherwise, their unusual degree of presence would send me orbiting around their sun at the expense of any pathway originating with me.

So the problem for me would be to find the native track that was my own, without dishonoring their significance, influence and reality.

A key segment of the path I followed is described in my almost-completed memoir, Confessions of a Young Philosopher. Without wanting to give the game away, Confessions portrays a succession of absolutely necessary “mistakes.” Much of what I know about life takes off from those missteps: misunderstood loves, mistaken beliefs, misplaced hopes.

In later years, after I was putting my life on a solider foundation, I found that the whole culture was making the mistakes of my youth! The very ones I was devoting a great part of my time, effort and thought to recovering from!

Early in this recuperation process, Leo Bronstein, the mentor to whom I have sometimes alluded in these columns, read the original draft of Confessions.

He told me then,

“You will look younger than your age —

because in actuality you will be much older.”