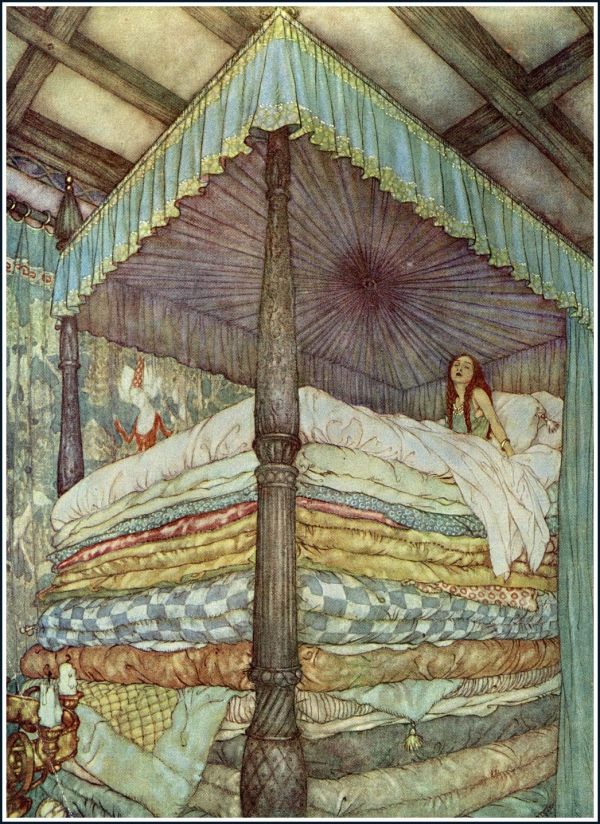 “The Princess and The Pea,” Stories from Hans Andersen, illustration by Edmund Dulac, 1911.

The other day a young woman I know, an artist and philosopher who picks up a dollar working at the cafe I frequent, said to me that some of the people she meets act so deplorably that she’s getting cynical about people in general.

I cited the cautionary note struck by Socrates: the hatred of reason (misology) and the hatred of people (misanthropy) are triggered in the same way. One meets a few real bad ones (bad arguments and bad people) and generalizes from there. But, says Socrates, the really bad ones are rare. Most (arguments and people) are somewhere in the middle.

Why do I think cynicism a state of mind to be feared? Especially since it’s pretty widespread and most people think it’s fairly normal.

If I’m right that it’s a danger, it seems to me that women would be particularly at risk. There is a fairy tale titled, “The Princess and the Pea.” You could tell a real princess, so goes the tale, by her tender skin.   The girl whose pedigree is under evaluation is given a bed to sleep on. It’s covered with a tower of mattresses, layered one atop the other. Underneath all the layers, a single green pea has been placed.  She wakes in the morning complaining that she’s covered with bruises and has been suffering all night long. She has passed the test. She’s a real princess.

We are urged to compete, to suck it up, toughen up, get out there and meet the rugged tests of experience. We do go out to meet the rough and tumble of real life, which will bruise us more than The Official Story (of our current liberation) admits. And the result is … cynicism.

What IS it? We are tenderer than we say we are. Cynicism is our method for dodging disappointment. We simply set the bar lower. Because secretly we know that we have been surprised, not in a good way – ambushed rather – we pretend that we can’t measure the drop between what we expected and what befell us. To do that, we would have to give reasons and arrive at a judgment based on our reasons. So we tell ourselves that reason too must be discounted. We say:

No one can know.

No one has a right to expectations.

So maybe Socrates had a point: misology is like misanthropy in that you get to both on the same road. Does this mean you can get back the same way? That all it takes is a very good man or woman, and/or a very good argument, to revive the truly disheartened?

Where shall we go, to find either?

and the countries of the barbarians are many.

You should search them all, sparing neither time nor expense

because you could not spend your resources on any better thing.”

The hatred of humankind and of reason can be applied reflexively to one’s own self and its cultural resources as well. The identities we own increasingly form part of a global civilization. That should be a good thing, and in many ways it is – except for the widening concentric circles of puzzlement – not only personal but civilizational — as to how to go forward sincerely while remaining who one is.

Our current philosophies mostly tell us that life is absurd, inherently purposeless, something we have by arbitrary stipulation, something we invent – though we may call our contrivings “creative.”

These are, however, pseudo-profundities. To be without motivation is not a philosophy; it’s a crisis! One needs to go back and find out where – precisely where – the purposive thread was dropped. What happened? Where’s the single, solitary green pea under all those layered mattresses? Never mind the people who tell you not to “sweat the small stuff” – just to push on, because life is absurd and there are no reasons to do one thing rather than another – no grounded motivations, no sincere purposes, no sustainable aspirations.

Nothing is more critical

than minding the small stuff –

looking under the insulating layers

It’s what any princess would have to do.