Three women I knew as a child seemed to me to have mastered the art of being a woman.  One was an opthamologist and eye surgeon.  She had been named Woman of the Year in New Jersey.  She was very Russian and I remember her saying, as she switched lenses to determine the right prescription, “Is it better-r-r now, sweethear-r-rt, or befor-r-re?”  Another was a Frenchwoman who did, so far as any chronicler could tell, absolutely nothing but serve tea or coffee with a sweet in the garden, stroke Nora, the black cat, and move in the most effortlessly gliding way through fresh topics of conversation as if the afternoon sun would never set on them.  These two women were my mother’s friends, and the third master of the art was my mother.  She could read Thomas Mann in the German, Proust in the French and Dostoevsky in the Russian.  When she died, the condolence notes cast aside all formality, as if the writers were sitting on her lap and she was their Mommy.

These women had been a success at something that is not ordinarily spoken of in terms of success or failure: being a woman.  How did they do it, I wondered?  Was there a set of instructions anywhere?  Even a child could see that a woman could succeed at many things — yet also fail at being a woman.

I came to think that it must involve a definite problematic, like painting with a limited palette.  The compression of forces gives the woman’s situation its intensity, potential for human achievement and risk of tragedy (tragedy not being the same as failure).  There was something to solve here, a dance to be danced.

It’s not usually presented that way, as a skill or an art.  Although we may if fortunate escape the burden of traditional limitations, the terms in which women’s lives are framed remain crucially uninformative.  The advice too often misses the real stakes for us.

I would like to open this site for conversation with women of all ages, convictions and styles of life – wherever situated on the gamut of experience.  In principle, there is no bar to men joining in, since how one defines women has a lot to do with what it means to be a man.  But it is women I invite to pull up a chair at this virtual café table and put their questions and views into the conversation.  I can be wrong as often as right, so specific advice will be avoided.  What will be sought is light on how best to frame the situation of women, considered as a highly interesting problematic.   What kind of hand have we been dealt, as women, and how can we best play it? 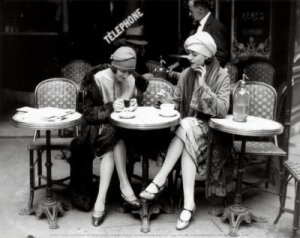 Abigail Rosenthal is Professor Emerita of Philosophy, Brooklyn College of CUNY. She is the author of A Good Look at Evil, a Pulitzer Prize nominee, now available in an expanded, revised second edition. Its thesis is that good people try to live out their stories while evil people aim to mess up good people’s stories. Her next book, Confessions of a Young Philosopher, forthcoming, provides multiple illustrations from her own life. She writes a weekly column for her blog, “Dear Abbie: The Non-Advice Column” (www.dearabbie-nonadvice.com) where she explains why women's lives are highly interesting. She’s the editor of the posthumously published Consolations of Philosophy: Hobbes’s Secret; Spinoza’s Way by her father, Henry M. Rosenthal. Her next book project will be Conversations with My Father, the "Genius" Among the Giants. Some of her articles can be accessed at https://brooklyn-cuny.academia.edu/AbigailMartin . She is married to Jerry L. Martin, also a philosopher. They live in Bucks County, Pennsylvania.
View all posts by Abigail →
This entry was posted in The Problematic of Woman. Bookmark the permalink.