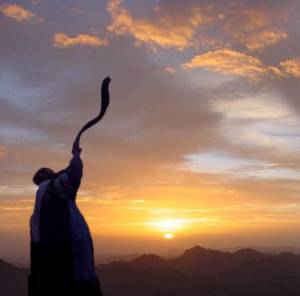 This is the season of deck-swabbing and deck-clearing, if you are Jewish. I tend to say that, at best, I am “Jewish in the head.” By that I mean: having tried a wide range of belief systems, I came at length to notice that there is more about the way I think that’s Jewish than there is, say, Christian, Lakota, or Hindu about my thinking process.

Since, due to an accident of my upbringing, I was disconnected in childhood from the congregational life of My People, I don’t have the early layers to ground me and stand on. That’s what I mean by “Jewish in the head.”

As I script this column, tomorrow is the service celebrating the Jewish New Year, Rosh Ha Shana. Everybody shows up, dressed appropriately. So I will too, now that I’m a member of a local Reform temple. (Reform is the most ritually tolerant denomination.) Unlike the other kids, however, I mostly won’t know what I’m doing. Here’s 3000 years of somewhat continuous ritual practices, of prayers with a particular shape to them, and I’m stumbling and trying to tell front from back, and sitting next to a buddy who’ll tell me what page we’re on.

At the same time, a few incidents recently nudged me in a direction that is no longer quite that of an onlooker or tourist or visiting anthropologist. These incidents produced in me the surprised sense:

this Jewish thing is real.

Ordinarily, the only Jewish thing I do with conviction is the intellectual thing: study. So I go to Torah Study on Saturday mornings. Last Saturday, I learned that there was to be an evening service on the topic of forgiveness: Selichot. For some reason my inner voice was loud in saying, Go!

So, after two such incidents — of being forgiven and forgiving — that evening I did go: to study forgiveness.

We read David’s Psalm 27, an absolutely astonishing piece of work. What is striking is that David gets absolutely into his human situation. He doesn’t try to get above it. He doesn’t try to be sublime. He gets into it — and more into it — till he becomes absolutely congruent with it. He gets into being David, and he stays there. From there, he can face his fears (rather than pretend he hasn’t got any) and ask God to give him what he really needs, (not what he thinks he would need, if only he were more saintly than he is). How amazing, this acceptance of the human situation, in a religious text!

Last night, I was thinking idly of the mild, shapeless discomforts of one kind or another that so often lurk at the borders of my awareness. The fears: of dying, or colliding with some catastrophe, of surviving those I love and being left alone, abandoned in the world. Having read reports from survivors of near-death experiences, I thought too of the “life review” (where you see all that you have done in your life and the effects on others) that reportedly comes after dying. I decided to make a list of all the things I had done that wouldn’t pass muster, once I died and had to undergo a life review.

Yuck! What a mess! The items on my list seemed vastly more prominent than any good things I might have done in my life.

I resolved to go down the list, look at each item square on, forego excuses and just try to think how I might have done it better. Then I decided, if such an item comes up again, to try to do it right next time. What else can “repentance” mean? (I think Jewish practice includes more, but this was as far as I got.)

It was astonishing how many apparently unrelated, amorphous, cloud-like fears seemed to lift off, get wispier and disappear in the azure. Facing moral facts, instead of feeling shadowed by them, I felt more real, more accessible to myself, more available to God.

So these are “the Days of Awe,” the days of deck clearing, the days when one is supposed to be engaged in stuff like this. I’m not well acculturated, as I said, so not sure how much more to it there is supposed to be. But once again, I am brought up short, almost colliding with the recognition:

this Jewish thing is real.