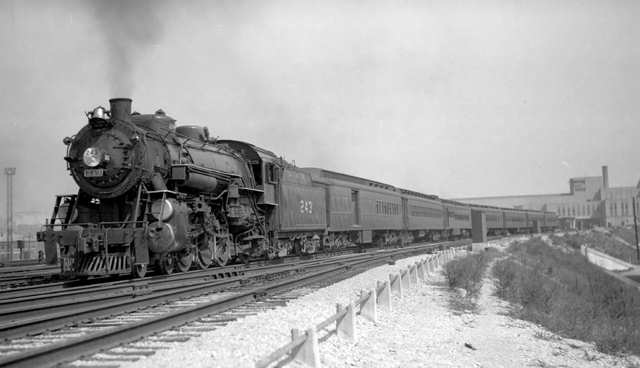 The Pan-American ran between Cincinnati, Louisville, Nashville, and New Orleans from the mid-1920s until 1971.

I may have a literary agent. At least, it’s suddenly a possibility. What happened was this. Every Friday I repair to a genuinely French café in a nearby town where I review the last six days and pull it all together. What does the week just past look like to me? Does it have a theme that stands out? Does it in any way announce or prepare the week ahead? Can prayer shed a further light or give a directive?

I never go there with a girlfriend or try to engage anyone in conversation – except if I can’t help it. The chef and proprietor once gave me a treat to take with me (a croissant? a madeleine?) that I hadn’t paid for. I asked him why he was distinguishing me in that way, since I contribute nothing to the common weal.

So that’s what I contribute: nothing. Last week, one of the young girls who works behind the counter asked whether I was a writer. (One reason I frequent cafés with a French tinge is that they have a place for people like me on their interior map. They know how to peg me.)

“It’s nice in the writing and editing stage, when you’re in your own kingdom. But soon I’ll be through editing and then I’ll have to face the next stage: finding a publisher. That part’s the tragedy.”

“Really? I love New York too. I’m a New Yorker. Well it’s a very good book. She could do a lot worse. Can you give me her name?”

“How long have you known her? How do you know her?”

“She’s a family friend. I’ve known her all my life. You can Google her. She’s been very successful.”

“Well, even if nothing comes of it, no harm done. And you never know! Thanks very much. I’ll call her this week.”

I’d been putting the manuscript through one more (really final this time) editing, to unpack its allusiveness and make everything plainer. Rather to my pleased surprise, the result isn’t prosaic or banal. It’s stronger because you see better what’s going on. So I worked more feverishly on the first part of the book, wanting to get it into personally satisfactory shape before telephoning the agent, whom I felt obligated to call this week, because I had told her young friend that I would.

I dialed in haste, heard a voice – warm, accessible, not “difficult,” feminine. Introduced myself, explained why I’d called and – as I should have foreseen – found myself a deer in the headlights of the question:

What’s the book about?

What kind of a book is it?

I drew a complete blank.

Stumbled through a few half-sentences, one sounding more flat and idiotic than the other. I certainly didn’t have what Jerry calls “the elevator talk,” when you tell the person what the book’s about as you both walk to the elevator. Finally, I thought of what two readers of an earlier draft had said, one well known to every philosopher, the other well known to everyone who writes or publishes. Each gave a cultivated, modulated, literary version of “awesome!”

Send me some chapters.

She may say yes. She may say no. Whichever verdict she gives, everything has changed. The book is no longer a piece of work between me, the page and whatever inspiration visits me. Now it takes on a future of its own, between the book itself, the world and the people who deal with books in the world.

Suddenly I’m part of a larger script, one I don’t write.

I have to remember: this is God’s world (as well as ours). I’ve never wholly controlled my part in it, or the part of the larger reality that comes into the plotline of my life.

All the same, right now this feels like boarding a train that’s moving at its own speed on its own timetable. There are a lot of country songs about railroads that tell how it feels.

As she passes that Nashville tower

You can hear that whistle whine … .