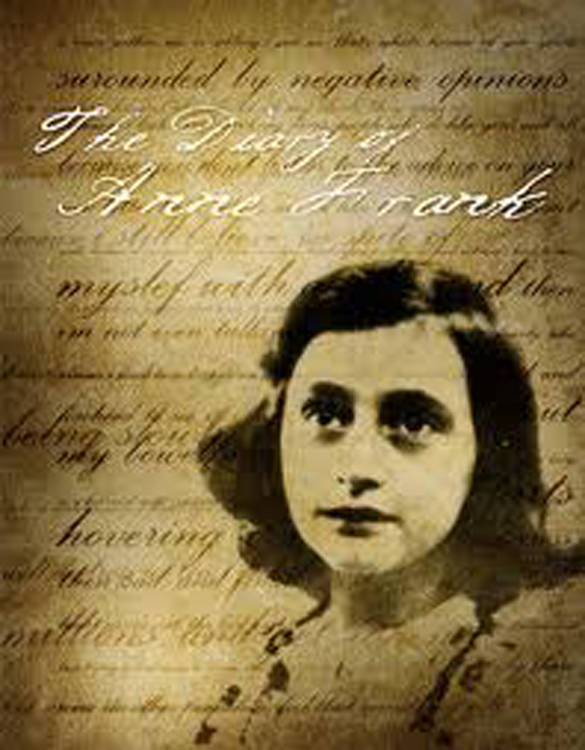 What a triumph that girl brought off!  Through her unassuming, young girl’s diary, the whole world came to share the sorrows and the innocence of the persecuted Jewish people.  Identifying with her was not difficult.  At the time of the diary, she and her family were in hiding in an attic in Amsterdam, so she did not look skeletal.  Her head was not shaven, her upper arm was not tattooed, her strivings to live a girl’s normal life not yet bent out of recognizable shape.

Anne was one victim, among millions, of what is by all accounts the World’s Longest Hatred.  Long ago, that hatred became a template in the culture.  Yet Anne managed to be seen as just who she was, not as one number in the mass of indistinguishable targets.

The curious thing is that the template (the hatred-and-being-hated) seems to me almost built into the Jewish Assignment in the world.  Look at that assignment!  God decides to cut out a certain group from the rest.  He will do a particular work with them: imprint them with the unforgettable common experience of Egyptian bondage and the exodus therefrom; instruct them to record, remember and transmit that experience down the generations; plant them in a country without natural defenses at the crossroads of Europe, Africa and Asia; exact of them a certain level of obedience that, as a collectivity, they will be unable to sustain (though individuals will be able); subject them to the anger of a God who will act like a wronged husband; keep them alive to draw more than their share of the lightning strikes of history.

Just as Plato founded the Academy so that, at minimum, the complete works of Plato would be preserved and not lost, so God founded a people so that the record of His consequential actions in history would not be lost.  The poet Keats once said bitterly, “My name is writ on water.”  God’s Name, and His game, are writ on Jewish records, not water.  It was a big undertaking, requiring political support, defensible territory, and time.

Why are the Jews hated?  Don’t make me laugh.  The above story, which I believe is the true one, is a recipe for getting to be hated.

Is there a cure?  Of course.  No hatred is incurable.  But people reach reflexively for the wrong bottle in the medicine cabinet.  Because people are dimly aware of the hatred, and don’t enjoy the feeling, they’ve tended to try the extermination remedy.  “I can’t stop hating you, but maybe if you don’t exist I can stop.”

Not bloody likely.  One time I was out for a stroll in New Zealand’s city of Auckland and passed by a Jewish cemetery.  As far as my eye could detect, there did not seem to be any Jews at all in that city.  I was curious and stopped to chat with the sexton.  He pointed out some gravestones defaced with swastikas and said to me, with a shrug directed heavenward, “We have our tsuris (troubles) here.”

At any rate, the lesson of recent times is that you can’t get rid of it (the hatred) by killing them all, and you can’t even get rid of it by restoring Jews to the family of nations in real history.

There is, however, a cure.  Two words: thanks, guys.  Thanks for taking on the original assignment, for continuing to live it out, and for keeping the record, widely used, of God’s action in history.

Here’s another suggestion: we take turns with the assignment.  I don’t know when the elites will begin to entertain reincarnation as a credible hypothesis, but the popular mind has already taken it in, on the basis of bodice-buster romance novels, TV interviews and documentaries.  Without getting into the arguments, the books, the articles, the interviews, the films of past life hypnotic regressions, the retrieved memories that get confirmed subsequently, the theological implications and the debunkers, let me get back to Anne Frank.

I often say, jokingly, “In my next life, I want to come back Swedish.”  Well, I hate to mention this, but it seems there is a Swedish woman named Barbro Karlen who has distinct memories of having been Anne Frank.   I have seen her on film and read her book, And the Wolves Howled: Fragments of Two Lifetimes, and I’m inclined to believe her.  Leaving aside the empirical question, let’s suppose, just as a thought experiment, that’s who she is.  What would it mean?

They are our great opportunities — to make ourselves concrete.  We can always be other-worldly.  Concrete existence is much harder.

Abigail Rosenthal is Professor Emerita of Philosophy, Brooklyn College of CUNY. She is the author of A Good Look at Evil, a Pulitzer Prize nominee, now available in an expanded, revised second edition and as an audiobook. Its thesis is that good people try to live out their stories while evil people aim to mess up good people’s stories. Her next book, Confessions of a Young Philosopher, forthcoming and illustrated, provides multiple illustrations from her own life. She writes a weekly column for her blog, “Dear Abbie: The Non-Advice Column” (www.dearabbie-nonadvice.com) where she explains why women's lives are highly interesting. She’s the editor of the posthumously published Consolations of Philosophy: Hobbes’s Secret; Spinoza’s Way by her father, Henry M. Rosenthal. Some of her articles can be accessed at https://brooklyn-cuny.academia.edu/AbigailMartin . She is married to Jerry L. Martin, also a philosopher. They live in Bucks County, Pennsylvania.
View all posts by Abigail →
This entry was posted in Culture, life and death struggle, Literature, Philosophy and tagged Anne Frank, anti-semitism, coming of age, Holocaust, Jewish, memoir, Shoah. Bookmark the permalink.