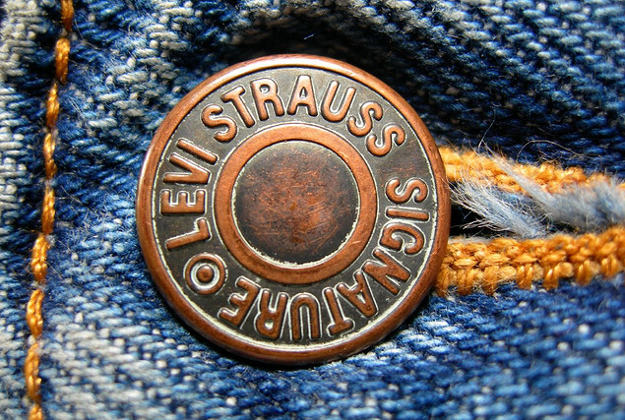 I may be wrong, but it’s my sincere belief that I was the first woman north of Greenwich Village to put on blue jeans for daily wear in Manhattan. At least, when I began the practice, it was not a common sight in my part of town.

Since garments “say” something, what was I communicating? (Whatever it was, I didn’t “say it” when I was teaching; that was in my eyes a more formal and ceremonial thing to do.)

Off duty, however, I observed

the faith of blue jeans.

The sidewalks of New York were – like a country field – a terrain.

You could stroll the length and breadth of the Big City without needing to make concessions:

Nowadays, when designer jeans even figure in high fashion ensembles, all this may go without saying.

“Thanks! That’s a real compliment,” I laughed. “Not like praising a beautiful sari, which nobody can help admiring.”

Harsha doesn’t wear a sari. She remarked that they are no longer much worn by young girls in India. Hard to run for the bus in a sari. Indian girls wear blue jeans, by preference.

Niall Ferguson, the economist, has written that the disillusionment of young Russians with the USSR was hastened by their passion for blue jeans. The Soviet regime was absolutely unable to make a decent pair.

Ulysses S. Grant, the commander who led the Union armies to victory in the Civil War, has described the California gold rush, whose early days he happened to witness. Ministers doffed their clerical collars, respected citizens shrugged off their family ties, all the duties of life were put on hold as thousands poured into California hoping to strike it lucky, panning for the yellow gold. They spent it as soon as they found it; they got fleeced; they emerged from their frenzy no better fixed in life than when they first let it take them over.

While others were losing theirs, at least one man kept his head. Or so the story goes. He decided to cut up tent cloth and sew it into work pants, in partnership with another fellow, Jacob Davis. The real gold of California was – and is still – in Levi Strauss’s work pants.

Are they quintessentially American?

Abigail Rosenthal is Professor Emerita of Philosophy, Brooklyn College of CUNY. She is the author of A Good Look at Evil, a Pulitzer Prize nominee, now available in an expanded, revised second edition. Its thesis is that good people try to live out their stories while evil people aim to mess up good people’s stories. Her next book, Confessions of a Young Philosopher, forthcoming, provides multiple illustrations from her own life. She writes a weekly column for her blog, “Dear Abbie: The Non-Advice Column” (www.dearabbie-nonadvice.com) where she explains why women's lives are highly interesting. She’s the editor of the posthumously published Consolations of Philosophy: Hobbes’s Secret; Spinoza’s Way by her father, Henry M. Rosenthal. Her next book project will be Conversations with My Father, the "Genius" Among the Giants. Some of her articles can be accessed at https://brooklyn-cuny.academia.edu/AbigailMartin . She is married to Jerry L. Martin, also a philosopher. They live in Bucks County, Pennsylvania.
View all posts by Abigail →
This entry was posted in Class, Cool, Culture, Fashion, Femininity, Gender Balance, History, Psychology, Roles, Social Conventions and tagged America, autonomy, beauty salon, blue jeans, California, canvas cloth, ceremony, Civil War, Civilization: The West and the Rest, clothes, democratic values, designer jeans, economics, formality, freedom, gender performance, gold rush, Greenwich Village, high fashion, informality, jacob Davis, jeans, Levi Strauss, Manhattan, New York City, Niall Ferguson, sari, sex appeal, Soviet regime, status, strolling, The Personal Memoirs of Ulysses S. Grant, Union, urban protocol, USSR, work pants, young Russians. Bookmark the permalink.