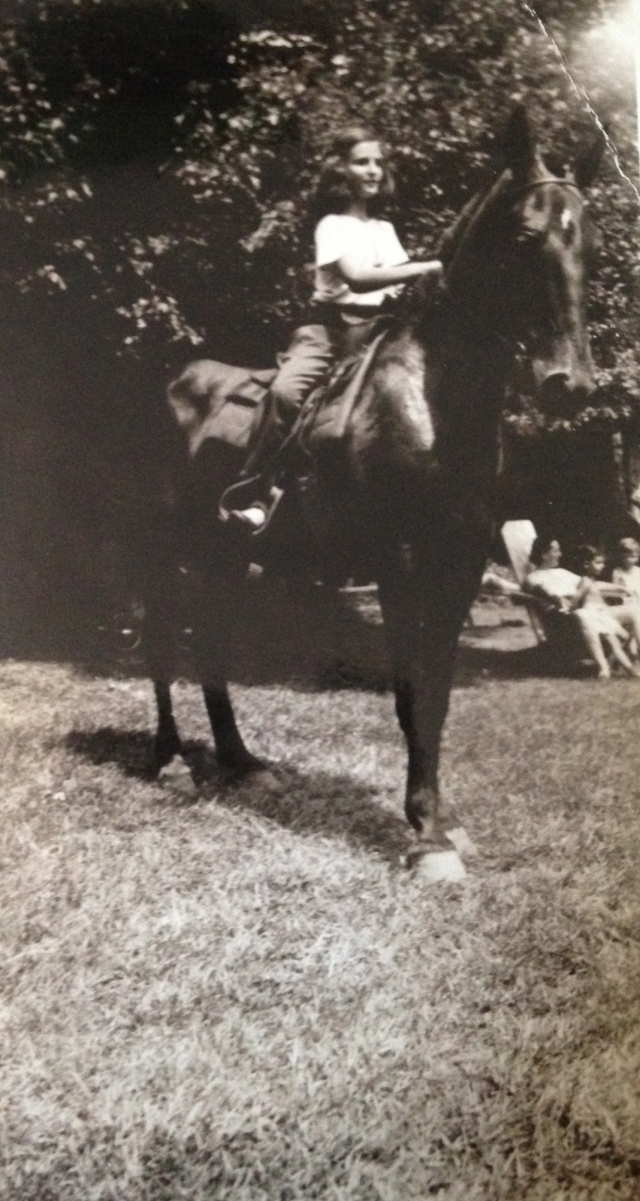 Abbie with Prince at Hilltop.

Like many girls, I’ve always loved horses. What does that mean? I don’t know if it has to mean anything. When there were still dray horses on Madison Avenue, the household sugar cubes used to disappear into their large equine mouths via my small hands.

When I was older, I used to stand for long stretches of time at the entrance to the bridle path on 90th Street and Fifth, saying,

“Mister, can I pet your horse?”

My father bought me a book titled Modern Equitation for Beginners, by an author who seemed to have been one of the late Czar’s Hussars. There were photos of the author jumping his mount over what looked like peasants’ thatched huts. Most of the book was given over to dialectical disputation with an unseen opponent of what my Hussar termed “the Forward Seat.” So, not very applicable to my life as a schoolgirl on foot.

However, one of the Hussar’s tips did come in handy one time. In Hilltop, I was taking a brief turn round the upper field on Prince (pictured above), who belonged to the farmer that lived down the road. Suddenly Prince broke into a runaway gallop and tore directly at the side of a cottage, no doubt meaning to stop dead and let me fly head first against the wall. Mentally flipping through Modern Equitation for Beginners, I found these words:

“Turn his head, so that he runs in ever-diminishing circles.”

Since I never try to outgrow things, many years later I took a riding vacation in the high country of Colorado. My guide was a Texan, recommended to me by his wife as a man fully at home in the wilderness. Chuck and I talked on the phone long distance beforehand. “Your wife says you’re a moral man, ” I said hopefully.

In the high country, he wore a band of ammunition round his chest and back and a pistol on his hip. He chewed tobacco and he cussed.   Sometimes we rode along very narrow trails, a sheer face of cliff on our right — to our left a pitiless defile. Riding ahead of me, Chuck would voice a wide range of opinions over his shoulder. One of them was that evolution was “just a theory.”

“Why didn’t you tell him,” asked a philosopher colleague whom I visited in Boulder when the week was over, “that theories are what science is?”

“Are you kidding? I was inches from death, Gary! It was not a good time to draw fine distinctions.”

My last such excursion was a week on a working ranch in Montana. Since at that time I was a vegetarian, my heart was not in the work, and I didn’t catch a single cow. They all got away! Also, the little cow ponies are very well muscled. Unless your legs will fit easily round a barrel, it’s pretty painful. What’s more, unlike the Western movies, there’s no music spanning the big Montana skies.

But the breakthrough realization that finally dawned was that — for me — the real frontier is the life of the mind.

I hope when I die there’ll be horses up there for me.

Abigail Rosenthal is Professor Emerita of Philosophy, Brooklyn College of CUNY. She is the author of A Good Look at Evil, a Pulitzer Prize nominee, now available in an expanded, revised second edition and as an audiobook. Its thesis is that good people try to live out their stories while evil people aim to mess up good people’s stories. Her next book, Confessions of a Young Philosopher, forthcoming and illustrated, provides multiple illustrations from her own life. She writes a weekly column for her blog, “Dear Abbie: The Non-Advice Column” (www.dearabbie-nonadvice.com) where she explains why women's lives are highly interesting. She’s the editor of the posthumously published Consolations of Philosophy: Hobbes’s Secret; Spinoza’s Way by her father, Henry M. Rosenthal. Some of her articles can be accessed at https://brooklyn-cuny.academia.edu/AbigailMartin . She is married to Jerry L. Martin, also a philosopher. They live in Bucks County, Pennsylvania.
View all posts by Abigail →
This entry was posted in Culture, Memoir, relationships and tagged a moral man, afterlife, childhood, cow ponies, cowboys, Czar, dialectic, dray horses, equitation, evolution, high country, horseback riding, horses, Hussar, Montana, ranch, runaway horse, Texan, theories, Westerns, wilderness. Bookmark the permalink.

1 Response to “Cowboy Up”