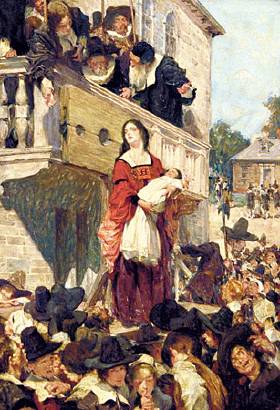 If anyone wants to control us, whether we’re women or men, short of violence the quickest way to get hold of us is by the guilt we carry. If we don’t want to fall prey to the controllers, we must do something about our guilt. But what?

Won’t it help just to admit it — the wrong we’ve allegedly done — face it and make it good? Yes of course, that’s fine, that’s nice, but the controllers will hardly be satisfied with our making a clean breast of it. The Protestant hymn says advisedly…

Could my tears forever flow

Could my zeal no languor know

… it would avail nothing to the accuser whose ulterior motive is control.

The people I’ve known who were self-immunized against appeals to conscience were battered veterans of such manipulative accusations. When they heard words like “moral,” “right” or “wrong,” they figuratively put their hands on their wallets. What they were really hearing was “rip-off.”

The feeling of guilt is about the most unpleasant feeling known to us. It can of course be stimulated by the consciousness of having done something one rightly regrets. The odd thing is that false accusations, angry denunciations that are unfair, can also stimulate that feeling. The feeling of guilt seems bottomless and chaotic. And intimate. On some level, accusation can sound true and well-founded, whether it is or not. In a way, slander is always believed, even by the one slandered.

Why this bedrock of self-accusation? Let me try my hand at an answer. As a naked species, up on our two legs with our prehensile thumbs, we are deeply vulnerable. We begin that way and we end that way. We cannot help our bodily functions and malfunctions, nor is there a cure for being outnumbered by other people and everything else nature contains. Quite apart from the predators, misfortune can befall us without it being anyone’s doing. So it’s reasonable to be uneasy.

It may be that guilt is a specific for our general unease. If we imagine that the human condition is our fault, then in principle we might be able to do something to alleviate its grave and unpredictable hazards. Imaginary guilt may give a reassuring feeling of control, where there is no control.

Is there any particularly female type of guilt? I am hardly an expert, but to my mind “female” suggests vulnerability or susceptibility. There are all kinds of reasons, cultural, historical, biological — and who knows? – why that’s a familiar feature of women’s experience. So a woman can get curious to fathom her own vulnerability, to live it through on its own terms.   Immediately, nowadays, there is protest from the inner feminist. So one feels guilty for noticing that one’s vulnerability has its own subjective appeal. At the same time, one feels guilty for repressing what may after all be a natural tendency. If we encase each of these internal polar opposites in guilt, will that get us back in control? But who will manage the guilt? If it gets too steep, we may hand it to someone else to control.

Why do we internalize unfair accusations — as quickly or more quickly than fair ones? Leaving aside the views of sociobiologists (that we are hardwired to agree with group attitudes because doing so has survival value), how does that believe-the-accusation syndrome feel to us?

“I’ll take you in, along with your accusation. I won’t push you away. You are a fellow sufferer like me. You are another human being. You are infinitely valuable. I’ll embrace you.”

Only with time and practice do we learn that the embrace – like the wedding shirt of Hercules – merely sets us afire. By the time we learn to unlearn this kind of “sociability,” it’s usually a bit late. We’ve been burned. All the same, however late it is, we have to draw back, figure out what really happened and make ourselves less reachable by unfair accusations.

The relevant truth is a hard one to believe:

We can suffer, being innocent.

Abigail Rosenthal is Professor Emerita of Philosophy, Brooklyn College of CUNY. She is the author of A Good Look at Evil, a Pulitzer Prize nominee, now available in an expanded, revised second edition and as an audiobook. Its thesis is that good people try to live out their stories while evil people aim to mess up good people’s stories. Her next book, Confessions of a Young Philosopher, forthcoming and illustrated, provides multiple illustrations from her own life. She writes a weekly column for her blog, “Dear Abbie: The Non-Advice Column” (www.dearabbie-nonadvice.com) where she explains why women's lives are highly interesting. She’s the editor of the posthumously published Consolations of Philosophy: Hobbes’s Secret; Spinoza’s Way by her father, Henry M. Rosenthal. Some of her articles can be accessed at https://brooklyn-cuny.academia.edu/AbigailMartin . She is married to Jerry L. Martin, also a philosopher. They live in Bucks County, Pennsylvania.
View all posts by Abigail →
This entry was posted in Culture, Desire, Erotic Life, Femininity, Feminism, Gender Balance, relationships, Social Conventions, The Examined Life, The Problematic of Woman and tagged accusations, brainwashing, conscience, control, Feminism, gender roles, guilt, guilt trip, Hercules, manipulation, morality, sociobiology, The Scarlett Letter, vulnerability. Bookmark the permalink.